An Editorial from Pagina Siete:

According to The Global Information Technology Report 2013 [for direct access to said report, PLS click here],prepared by the World Economic Forum, Bolivia ranks number 119 of 144 in technological development. The document is the result of an annual assessment, considered the most important in the world, the impact of information and communication technologies (ICT) in the processes of development and competitiveness of countries. ICTs comprise the set of resources, procedures, and techniques used in the processing, storage and transmission of information.

The study collects survey data and statistics from each country into four main areas: regulatory aspects and companies; access, infrastructure, and digital content; the use of individuals, institutions and companies; and finally the social and economic impact of ICTs in development.

[The following chart is from an earlier Pagina Siete article, to read it in Spanish, PLS click here] 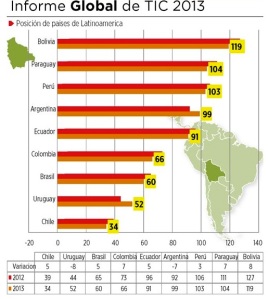 In the case of Bolivia, the report notes that the country has gone up eight positions between 2012 and 2013; However, it maintains deficiencies related to the cost of access to internet (the highest in the region) and its low penetration. Also, says that citizens focus their internet accessing to social networking activity and entertainment, and not in education or public services [which are key to become more competitive and fight poverty and useless demagogues who remain in Bolivian politic life… most computers are used just to type letters and play solitaire…]. In Bolivia very little is bought and contracted through the internet. Almost none of the stores, restaurants, hotels, etc., allow payments by credit card, for example. And almost nobody pays the services – such as water, electricity and phone – or cash their retirement through the web. Neither are taxes paid, consult procedures nor look for city neighborhoods using GPS maps.

Nothing of what has become known through this document may cause surprise. It is well known that, despite the remarkable increase in indicators of access to technology through mobile telephony, there is no digital culture in the country. If it is notorious the social use of the networks, particularly in urban areas, the access gap is still very big and internet service quality (bandwidth) is clearly precarious, even in the cities.

The Government announcement to implement a satellite exclusively for Bolivia, to the technological gap with the rest of the planet, has not accelerated; and efforts to improve the internet service for all over the country are still very little evident.

All of this is fed with the low culture of openness of information that occurs in public and private companies, and the weak innovation capacity of schools to incorporate technology into education.

Follows excerpts of the page info of said report: 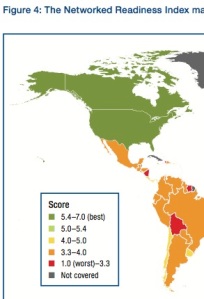 Another absurd and futile demagogic move by current government: to buy a Chinese satellite will more likely end up in another white elephant.

Public policy should work on providing better, fast and cheap service for all internet users. Bolivian society and private sector should focus on using technology more appropriately, for productive and competitiveness rather than leisure.

So, we need to revise our current use of the web… lets be more productive, more innovative and thus more competitive!! For example, if a Bolivian creates an App for Apple, there will be immediately access to literally billions of consumers! The sky is the limit! And the government, this one and others to come, should facilitate Bolivian society!

2 responses to “Technological backwardness in Bolivia”