The life of a notable Bolivian in Europe: Jaime Ortiz-Patiño

An interesting drive force, an example to follow; Bolivians need self-esteem and determination to triumph here and/or abroad. 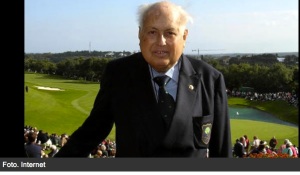 The flag of Bolivia flies at half-staff since Thursday at club de Valderrama, one of the best in Europe, on the South of Spain, after the death, at the age of 82 of its Honorary President of Bolivian origin Jaime Ortiz-Patiño.

Ortiz-Patiño was the driving force behind this club, located in the province of Cadiz, considered one of the best golf courses in the world, and has been a leading promoter of golf in Spain thanks to the celebration, for years, of the renowned Volvo Masters.

His death has caused a huge regret in the field of golf in Spain and Europe. Born in Paris of Bolivian parents, great-grandson of Spaniards and grandson of Simón Patiño, who was known as the King of the Tin in Bolivia and Ambassador of that country in the capital of France, Ortiz-Patiño made Valderrama golf in Europe one of its ‘cathedrals’.

“He (Jaime) has provided moments of pride to the European circuit. It was him who, in some way, changed the course of golf in Europe,”stressed the British George O’Grady, Director delegate of the European golf Circuit.

The President of the Royal Spanish’s Golf Federation, Gonzaga Escauriaza, extolled the Jaime Ortiz-Patiño’s figure and said about him that he went “determinant in development in Spain not only golf, but also on quality tourism”.

“He placed Sotogrande, San Roque and the Costa del Sol on map and announced them to the world, even in the United States,” he added.

The best Spanish players in golf also had words of admiration and recognition to the work and personality of Ortiz-Patiño.

Golfers as José María Olazábal, recent European Ryder Cup captain, recalled multiple discussions with the person who died. “He was always interested about the future of the Tour, it had a very broad vision and things very clear,” said the Basque player.

“I remember the enthusiasm that he had in the first Volvo Masters. He liked to control everything, even if it was sometimes a little drastic. He got up at 4.30 in the morning, at night, and went to the field to work with his maintenance team. He was even holding the machine and cut the grass of the ‘greens’. He had a marked and very special character, that anyone doesn’t have it,”he thought.

For Sergio García, last winner at Valderrama (Andalucia Masters 2011) “is a very sad moment, not only for Spain but for the whole world of golf”.

“Jaime Ortiz-Patiño was a great man; He created something very special, a masterpiece that will remain forever,”added Castellon.

Angel Gallardo, Vice-President of the European circuit, noted that the last time he saw him “was in November”. “He came to dinner at my apartment at Crans-sur-Sierre (Switzerland). He brought a very good wine and ate “Fondue Bourgignon”, which he loved. “It was a very pleasant evening,” he said.

“I think that Jaime has not only done a lot for the Spanish golf courses but also for the European; He has been ‘the soul’ of the golf in Europe.

We named him Honorary Vice-President of the European circuit”, stressed Gallardo.

Follows an article from the Golf Channel:

Jaime Ortiz-Patino, the owner and honorary president at Valderrama who played an instrumental role in helping the Spanish course host the 1997 Ryder Cup, died Jan. 3 in a hospital in Marbella, Spain. He was 82.

Born to Bolivian parents in Paris in 1930, Patino – known as “Jimmy” among friends – was a legendary figure in Spanish golf and became synonymous with Valderrama, his prized venue that went on to host dozens of European Tour events.

“His foresight and dedication to the game through the Volvo Masters and, of course, the Ryder Cup, was legendary, as was his dedication to excellence in terms of his preparation of a golf course,” said George O’Grady, chief executive of the European Tour. “Nobody had seen a golf course presented the way Valderrama was. He raised the bar in that respect.”

Maintaining a lifelong interest in course maintenance, Patino received the Golf Course Superintendents Association of America’s Old Tom Morris Award in 1999, the industry’s highest honor. He was also named an honorary life vice president by the European Tour in May 2010.

“Valderrama is his masterpiece, his legacy,” noted fellow Spaniard Jose-Maria Olazabal. “He wanted to make it a very special place, and he did it. He put Valderrama and that part of Andalucia on the map.”

“This is a very sad day, not just for Spain but but for the whole golfing world,” said Sergio Garcia, who won the 2011 Andalucia Masters at Valderrama.

Patino is survived by sons Felipe and Carlos and four grandchildren.

May Jaime Ortiz-Patiño rest in peace! The Hall of Bolivian Fame welcomes Jaime!