Ham, the delight gourmet that Tarija improves every year

FLAVORS. The tradition of making ham, which arrived with the Jesuits and Franciscans, was deeply carved in Tarija culture. Ulloa, one of the best-known company reflects the secrets of its flavor. 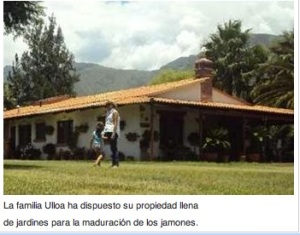 It is a tradition that came with the Jesuits and Franciscans centuries ago. Now that heritage has become a gourmet product that is gaining ground in the domestic market and has international projection. Thanks to its taste, the ham made in Tarija conquers the palate of friends and strangers.

The Association of producers of ham Tarija (Aprojat) has currently 15 affiliated companies and one of the main events that place is the ham Festival, held recently in the ‘chapaca’ capital [is the nickname for Tarija, its people, etc].

One of the most traditional producers is Ulloa ham, a company installed in a cottage in the town of Turumayo and founded by Rafael Camponovo, cousin of the renowned architect Ernesto Camponovo. “My uncle grandfather, Rafael, was responsible for the clergy as the custodian of the churches.” Back then, there was a priest called Juan Nicolai (‘). It was when my family began to relate to the theme, more than 40 years ago,”says the Manager of the company, Julio Ulloa.

Ulloa, who was studying in Italy a masters on animal nutrition, was – as all student – always with limited money and had his ways to satisfy the craving of eating ham. So he began to dabble in its elaboration. Today, Ulloa ham produces 800 pieces per year.

The secret of the taste

Along with a few cousins and Spanish professionals, this entrepreneur discovered the secret to achieve high quality hams. The key is a set of climatic factors and the quality of pork meat.

In the Tarija and Chuquisaca region remains a line called dual purpose, i.e. it comes from pigs that have a good percentage of meat and fat at the same time.

“Having a balanced summer, which does not exceed 35 degrees [Celsius] in the day and 14 degrees at night, with no more than 65% humidity, and winter temperatures ranging from 14 to 16 degrees, are the favorable conditions to prepare a good ham”, explains Ulloa.

Another important factor is the time in which each process of elaboration of a ham, is done from the choice of leg, profiling, salting or cured in salt, the post-salting, drying, and finally rest. All of this takes from one year and eight months to two years.

Ulloa company participated as an exhibitor in the latest ham Festival. This event has become a local attraction with contests that evaluates and rewards to producers.

“Today there is no better supplement for wine than ham produced in Tarija, which of course is complemented by the tarijeños’ friendship”, mentions the Aprojat Treasurer, Paul Magnus.

Currently the Ulloa hams market are restaurants like La Suisse in La Paz and Pastrami in Santa Cruz, as well as embassies and customers’ special orders. The Department who buys more product from this company is Santa Cruz.

As explained by Ulloa, salt that comes from the Salar de Uyuni is similar to the ocean and that is why it has the number of ideal elements such as nitrites and nitrates (parts of the formulation of the salt) so that in Bolivia hams are cured and achieve optimal quality.

“That is a secret or a discovery which has been obtained thanks to the hams,” he explains.

Cold and hot chambers are the places where the hams are kept, waiting to be ready for consumption. The price per kilo is currently Bs150 [current exchange rate to the dollar is Bs6.96].

In an almost idyllic landscape, where the temperatures are very similar to those that are in Spain, according to the producers, the flavor that today is accomplished, is considered as one of the perfect companions for wines produced in Tarija.

I congratulate those entrepreneurial innovations and welcome them to The Hall of Bolivian Fame!