Bolivia has 30 varieties of Quinoa!!

At last some positive news! We have a very rich wildlife which as is in this case. These varieties could provide us with the comparative advantage we need to sell our products overseas. Not so long ago a European producer advertised they were getting a fine vodka liquor out of quinoa; I know there are some places in the US that quinoa is also grown. Unless we make sure that we protect our genetic material and make sure that we have patents and other legal paperwork in order, we will lose big time.

I am specially happy to find out there is still hope to be competitive out there! I recall many years back that two special varieties of wild cotton were found in our land; one was dark blue and the other brownish; the prospect for the “organic” clothing industry was endless… but until this date I heard nothing happened to those varieties. I hope we ‘keep’ those 30+ varieties safe and profit from them, I mean Bolivian entrepreneurs with the help of foreign investment but those varieties should be marketed as Bolivian produce. Not like “Brazilian nuts” which is our chestnut (castaña), we produce it, but gets to international markets with the “Brazilian” tag.

This is from El Deber: 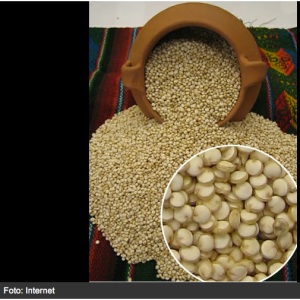 The head of the research unit of the National Institute of innovation farming and forestry (Iniaf), Jorge Guzmán, reported on Friday that Bolivia has at least 30 varieties of quinoa that do not grow in any region of the world.

“If we add-in the different regions of the country, we are talking about over 30 exclusive varieties of quinoa to Bolivia that are not produced anywhere else”, reported to ABI [news agency].

In addition, Guzman explained that Bolivia, has one of the most important varieties, called quinoa “Ratuki”, which has the capacity to withstand sudden climate change.

Also announced that many regions of the country strengthened the cultivation of the quinoa “wild with hard grain” (ajaras) to increase the production of the “quispiña” and encourage its export.

He recalled that the quinoa is one of the few foods of vegetal origin and nutritionally complete that presents an appropriate balance of proteins, carbohydrates and minerals. ABI