The protest-walk group in defense of the TIPNIS has had more problems than last year’s, however, their resolve and strength is such that we should all be proud!

Marchers are rejected in Sapecho and go to Km 52

Around 11:00am, the marchers reached the point known as Piquendo, where they rested for some moments, later they moved forward at least 12 kilometres to reach the spot called kilometer 52 where they will stay until Monday.

The Secretary of the Committee of the March, Leandro Canapey, explained the obstacles which had with some authorities of some populations that did not allow the marchers to stay in those places.

“Some authorities and the community accepted not to reach Sapecho, with the decision to continue, I think we’ll get to kilometer 52, we are willing to, will go calmly, women and children, and with some difficulty also because in Piquendo we received boos”, said the representative.

From the San Antonio area of the town of Palos Blancos, the March advanced to kilometer 52, approximately 21 kilometres. This stretch is climbing and is tiring for the marchers, mainly for women and children.

The IX March started its journey on April 27 from the city of Trinidad (Beni) demanding the repeal of the law 222 of [‘prior’] consultation for the construction of the section II of the Villa Tunari – San Ignacio de Moxos road, going through the middle of TIPNIS.

Indigenous to the OAS claim that Government violates human rights 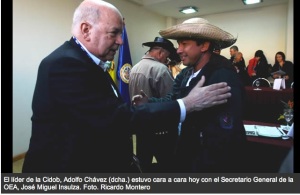 “We have explained on what happened in Chaparina, the loss of freedom of expression and warned that human rights and indigenous rights are being violated.” “Democracy is in danger in Bolivia, if the OAS does not intervene will be jointly responsible”, said Adolfo Chavez, President of the CIDOB. [photo by Ricardo Montero]

The meeting in the Chiquitano Lounge between Insulza and indigenous delegates lasted an hour and a half where they explained the events of September 25th of last year in Chaparina and subsequent events that led to the ninth indigenous March which now calls not to conduct a consultation on the TIPNIS (Isiboro Sécure National Park and indigenous territory).

“I will not rest at peace until not ceases the violation of human rights in Bolivia, and that was informed to Mr Insulza”, said Fernando Vargas, President of the sub-central TIPNIS.

He added that the ninth indigenous March will continue until they reach La Paz city to demand annulment of the law of prior consultation on the construction of the Villa Tunari-San Ignacio de Moxos road.

Rafael Quispe, former Mallku and leader of the CONAMAQ, described as positive the meeting with Insulza because it allowed to explain him about what happened in Chaparina.

“We’ve talked about the impunity that exists in the judicial investigation and the violation of our human rights, and if there is another fact as Chaparina, Mr Insulza and the OAS would be co-responsible and accomplices of this”, said.

Quispe pointed out that the demand from indigenous people will not stop and that the next step would be to resort to the Inter-American system of human rights and other international courts of justice.

The Secretary general of the OAS, José Miguel Insulza, on Saturday also heard delegates of the Government and leaders of the Conisur for other details of the conflict on the Tipnis.