This photo shows the concern and pain the Civic Committee of Potosi, leader Marco Pumari, has as he reports snippers attacking the second bus caravan going to La Paz city. 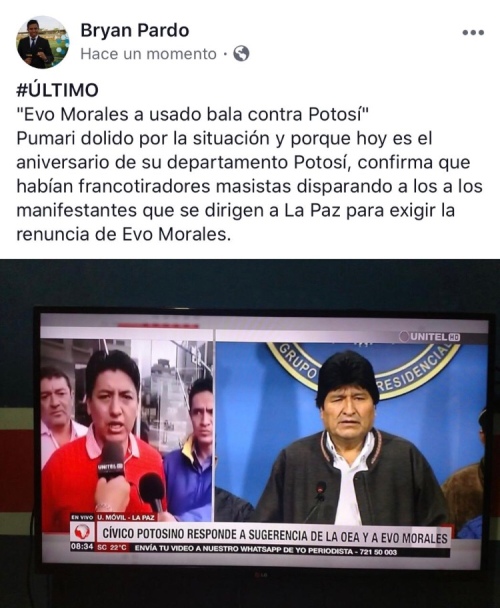 Yesterday, buses with university students from Potosi and Sucre were attacked with dynamite and rocks, 14 of them were taken hostage, four females forced to strip down and all were beaten.

This video shows Potosí miners running along their buses, protecting their women and younger males. Bravery is the brand of Potosino miners!

Bolivian citizens continue, for at least 19 days, mobilized on a general strike against evo’s electoral fraud. OAS ruling brings some hope, however, as the photo below reads: “Until evo leaves, there is nothing to party about. Let’s not abandon our blockade points, nor the vigil we have over the police, every hour is crucial.”

At least three wounded, shot, in the road, from Oruro to La Paz. evo definitely lost his marbles, he is a delusional sick man that only cares about staying in power.