The director of Inaset noted that the compensation of workers as a percentage of GDP was reduced from 36% to 25% until 2013. 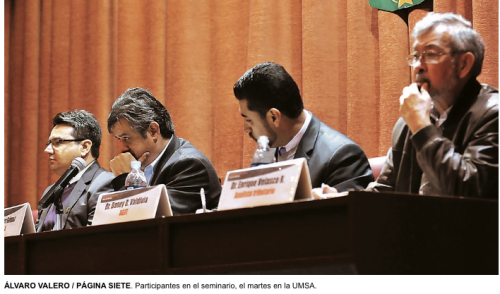 In recent years, workers have allocated up to 55% of their income to pay taxes, according to a working paper presented by the Center for Studies on Labor and Agrarian Development (CEDLA).

The analysis was presented at the seminar “Tax pressure without justice”, held yesterday and Tuesday [06/13/2017] at the Universidad Mayor de San Andrés (UMSA).

According to data analyzed based on information from the Ministry of Economy and the National Institute of Statistics (INE), from 2006 to 2015, on average, 55% of their gross income was used to pay taxes, both national and municipal taxes, and customs.

In the case of the private sector, the pressure was 27% for companies in the hydrocarbons sector and 16% in the rest of the companies.

According to Enrique Velazco, director of the Inaset Foundation, this inequality is confirmed by an analysis of the structure of Gross Domestic Product (GDP) from the income perspective, composed of workers’ compensation, the gross surplus that retain business and taxes.

Velazco argued that this increase in taxes as a percentage of GDP is presented to the detriment of workers’ income, since in the same period, the gross surplus of companies remained stable, close to 50%.

“The logic of tax policy is one of collection, and the one who is going to fall more easily is the worker, because he is the one who has less chance of defending himself,” he said.

Velazco identified that the collection logic applied by the Government comes from the decade of the 80s and has as a consequence a reduction of consumption, which in turn affects domestic demand, which decreases generating a lower demand for manual labor and so for employment.

“The State, in maintaining this situation, collects more, but in the long run, workers have fewer resources for consumption, which discourages domestic consumption and employment, making a small economy such as we have, into a smaller one and benefiting the import and smuggling, which replaces domestic products, that become less competitive in the market,” he said.

In other words, this ruling ochlocracy which was self-labelled as “socialist” is causing more damage to the worker’s take home pay …