A confidential informant says the DEA had its sights set on Bolivia’s populist leader.

The United States has secretly indicted top officials connected to the government of Bolivian President Evo Morales for their alleged involvement in a cocaine trafficking scheme. The indictments, secured in a U.S. Drug Enforcement Administration sting called “Operation Naked King,” have not been previously reported.

Morales, a former leader of Bolivia’s coca growers union, has long been at loggerheads with the DEA. In 2008, Morales expelled the agency from the country and embarked on his own strategy of combatting drug trafficking, acknowledging the traditional uses of coca in Bolivian culture and working cooperatively with coca growers to regulate some legal activity and to promote alternative development elsewhere. Morales’ plan has been effective at reducing cultivation, according to the United Nations.

But that doesn’t mean the DEA accepted its eviction quietly. In fact, the agency went after members of Morales’ administration in an apparent effort to undermine his leadership.

The sealed indictments, revealed last week in a lawsuit filed by long-time DEA informant Carlos Toro, target Walter Álvarez, a top Bolivian air force official; the late Raul García, father of Vice President Álvaro García Linera; Faustino Giménez, an Argentine citizen and Bolivian resident who is said to be close to the vice president; and Katy Alcoreza, described as an intelligence agent for Morales. Toro said in the court document that he played an integral role in securing the indictments as part of the DEA’s undercover investigation into the alleged Bolivian cocaine trafficking ring, which the agency ran out of its office in Asuncion, Paraguay.

Toro filed suit against the federal government in the U.S. Court of Federal Claims in September, asking for $5 million in unpaid compensation for his more than 25 years of work for the DEA. A one-time senior official with the Medellin cartel, he went public about his career in a series of interviews with The Huffington Post, and subsequently with CBS News. He has been involved in the investigation, arrest or prosecution of major figures, from Colombian drug trafficker Carlos Lehder to Panamanian dictator Manuel Noriega, to top members of Mexican cartels.

Spokespeople for the State Department, Department of Justice and DEA declined to comment. However, previous media reports in the region have accused top officials in the Morales administration of being involved in international cocaine trafficking. Rene Sanabria and Oscar Nina, both former top anti-drug officials in the Morales administration, have been arrested for drug trafficking. Nina was arrested this March and Sanabria was arrested in Panama and extradited to the U.S. in 2011; his defenders suspect the arrest was politically motivated.

This week, the Obama administration announced that it’s planning to officially “decertify” Bolivia — a bureaucratic move which amounts to an accusation by U.S. officials that Bolivia is not sufficiently cooperative in combating drug trafficking.

Morales on Tuesday addressed the decision to withhold U.S. funds for drug control purposes, calling it a political maneuver by a nation committed to ineffective anti-drug tactics.

“I think it is a political action exerted by the State Department of the United States,” he said during a press conference at the government palace, according to an English translation of a report in Bolivia’s La Razon. “But if we are honest, U.S. policy is a failure in the fight against drug trafficking in the world.” 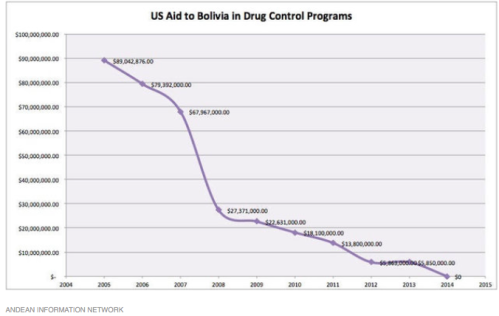 Morales went on to tout Bolivia’s recent successes in reducing coca production, and cited Colombia — which has, according to the United Nations, seen a significant increase in coca cultivation over the past year, despite U.S. support — as an example of U.S.-backed failure.

“I could mention many countries in the world where there is this problem and how it has grown with U.S. presence,” the president said. “They’re using the fight against drug trafficking for clear political purposes.”

While the White House identified Colombia as a major illicit drug producer, it wrote that the nation has “demonstrate[d] highly effective leadership in countering illegal drug trafficking and transnational crime,” calling the country a “strong partner on counternarcotics.” As evidence, the administration pointed to high levels of recent crop eradication and drug seizures.

Morales and the DEA have a long history of animosity. Morales, a member of the Aymara indigenous group and a one-time coca grower, first rose to power in Bolivia as the head of a federation of coca growers unions. The union gained much of its strength by organizing in response to human rights abuses carried out by the DEA-backed anti-drug group known as UMOPAR, starting in the 1980s. In 2005, Morales led nationwide protests that toppled the government of former Bolivian President Carlos Mesa.

Morales became president himself in 2006, and has twice been re-elected by wide margins. When he was first campaigning, Bolivians in the coca-growing region of the Chapare, where the president got his start, recalled his rise as a response to the U.S.-led drug war. Jaimie Rojas, then a 74-year-old newspaper vendor in Villa Tunari, a town in the Chapare, had known Morales since he was in his early 20s. “He was able to unite the people and have them all turn back UMOPAR,” he said of Morales in a 2005 interview.

“The war made the American government’s intentions clear to the people of Chapare. Behind the war on drugs there are other interests. Interests in natural resources, and in dismantling the unions in the Chapare,” said Feliciano Mamani, a leader in Morales’ political party and a coca grower.

Many indigenous Bolivians, including Morales, defend coca production as a traditional right. After all, Bolivians have used coca leaves in a variety of ways for thousands of years. But coca is also the essential ingredient in cocaine, and the nation’s close relationship with the plant has made it the world’s third-largest producer of the drug, behind Peru and Colombia.

The U.S. government and the DEA made no secret of their displeasure when their longtime nemesis, Morales, was elected. “If radicals continue to hijack the indigenous movement, we could find ourselves faced with a narcostate that supports the uncontrolled cultivation of coca,” General James T. Hill, a U.S. army commander with the Southern Command, told the House Armed Services Committee in March 2004, referring to Morales’ movement.

“I don’t think there’s an attractive or viable future by becoming a narcostate,” John Walters, then the Bush administration’s drug czar, told The New York Times the next year, when it appeared Morales was on his way to victory.

Morales used the accusations to his political benefit. “They accuse me of everything,” Morales said at a campaign rally, according to the same Times article. “They say Evo is a drug trafficker, that Evo is a narcoterrorist. They don’t know how to defend their position, so they attack us.”

There is a running joke in Bolivia and other Latin American countries that goes like this:

Q: Why has there never been a military coup in the United States?
A: Because there’s no U.S. embassy in the U.S.

In September 2008, Morales made sure there wouldn’t be one in Bolivia, either, and kicked U.S. Ambassador Philip Goldberg out of the country.

Then, that November, Morales expelled the DEA, arguing that the agency had committed human rights violations, covered up murders and was routinely using its investigative powers to target politicians and movement leaders who were challenging Washington’s neoliberal agenda. Morales had made a campaign promise to nationalize the country’s natural gas resources and use the proceeds to develop the economy from the bottom up.

Responding to Goldberg’s dismissal, a State Department spokesman said at the time, “The only overthrow we seek is that of poverty … No country has ever improved the well-being of its citizens by antagonizing neighbors and refraining from fruitful integration with the world’s democracies.”

Yet under Morales, Bolivia has boomed — with much of the benefit accruing to the very poor — in a stunning success story.

Its economy grew an estimated 6.5 percent last year, among the strongest rates in the region. Inflation has been kept in check. The budget is balanced, and once-crippling government debt has been slashed. And the country has a rainy-day fund of foreign reserves so large for its relatively small economy that it could be the envy of nearly every other country in the world. The Times article notes that extreme poverty under Morales has plummeted, despite — or, more likely, because of — his refusal to follow the path the U.S. has urged.

The country’s triumph comes as it faces a foe greater than neoliberalism, however. La Paz, which sits some 13,000 feet above sea level, depends on the snowmelt from the surrounding mountains for its survival. As a result of climate change, the snowpack is disappearing.

In the face of U.S. denunciations that Bolivia would become a narcostate under Morales, the country has instead managed to reduce coca leaf cultivation, especially over the past five years. According to the United Nations Office on Drugs and Crime, total production of dried coca leaf fell 11 percent from 2013 to 2014, and has fallen by an average of nearly 10 percent each year since 2011. Interdiction efforts targeting coca cultivation have also dropped precipitously since the DEA’s dismissal in 2008, though confiscations of cocaine continued to rise until 2013, when they dropped off significantly. In 2014, confiscations of processed cocaine hydrochloride returned to previous levels, though interdiction of coca leaves and cocaine base remained low.

“[Drug trafficking] must be fought — we are convinced of that — and we are doing so more effectively and more wisely,” Morales told Al Jazeera in a 2014 interview. “When the United States was in control of counternarcotics, the US governments used drug trafficking for purely geopolitical purposes …. The US uses drug trafficking and terrorism for political control …. We have nationalised the fight against drug trafficking.”

In 2009, Hillary Clinton warned of Morales and the late Venezuelan President Hugo Chávez’s “fear mongering” in written testimony during her secretary of state confirmation hearings. Yet Morales’ fears, it turns out, weren’t rooted in mere paranoia. The DEA was, in fact, out to get him.

The revelation of Operation Naked King goes to show that Bolivian leaders’ paranoia was well justified, said Kathryn Ledebur, who runs the Andean Information Network based in Bolivia. “US authorities frequently dismiss Bolivian government denunciations about the DEA and US intervention as absurd speculation, but these revelations show what is common knowledge on the ground — there has long been an alarming lack of oversight of DEA operations in Latin America, including recurring mission creep and a violation of agreements with host countries,” she wrote in an email.

“Even before Morales’s election, high-ranking US officials warned his policies on coca and drug control and rejection of American policy dictates would plunge Bolivia into drug trafficking chaos. Yet, without the DEA or US funding, Bolivia has consistently improved its track record, with the lowest coca crop in the region and credible interdiction policies. There’s a lot of cognitive dissonance for US drug warriors, and in this case, it appears some worked to make their predictions appear true.”

This story has been updated to include a response from Bolivian President Evo Morales to the U.S. decision to withhold funds for drug control. On Tuesday morning, Ledebur and HuffPost’s Nick Wing appeared on Democracy Now! to discuss the revelations.