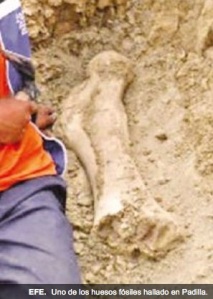 A team of paleontologists found a fossil site of the Quaternary period, in the town of Padilla, Chuquisaca, EFE reported. These are remains of large mammals, weighing more than a ton, and belonged to a “megafauna”.

The remains were found by residents of the area over 60 hectares in the municipality of Padilla. They belonged to large mammals, said the Uruguayan paleontologist Pablo Gabriel Toriño, University of Science of the Republic of Uruguay, who is in Bolivia as part of an exchange program between universities.

Among the species identified from fossils found, were the mastodon, giant armadillo and the sloth that lived during the ice age called. Studies the remains of mammals revealed that belong to the Quaternary period, which took place 10,000 years ago.

According to the president of the University Scientific Society of Paleontology (Sociupa), Omar Medina, these new discoveries make the country a “world leader in the paleontological study.”

Following the discovery of fossils, the teams work on the extraction of the residues that are at ground level and are at risk of being robbed. Medina hoped that in the future these findings will be exhibited in a museum of the ice age.

For more information on this subject, you could also access to a more detailed news from El Deber:

use this link, thank you.