Alissa Walker wrote in her blog:

In most parts of the world, cable cars are relegated to ski areas or amusement parks. But in South America, cities use the gondolas to navigate undulating terrain as public transportation. This fall, two more lines will open in Bolivia’s La Paz-El Alto network, making it the longest urban cable car system in the world.

This new “subway in the sky” (which looks pretty much like a bunch of ski lifts) is able to lift residents up and over the urban gridlock, allowing them to move between the two city centers faster and more efficiently. As part of a story this weekend, the New York Times made a beautiful video celebrating this rather elegant transit system, which residents call the “red line.” 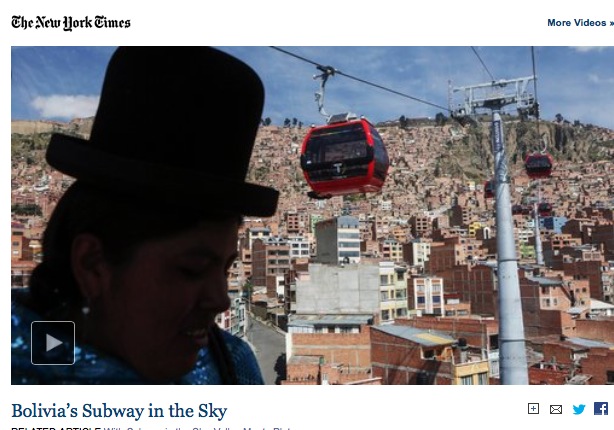 The potential for this new method of transportation to transform cities like La Paz is huge, where the city is built on veritable alpine cliffs 12,000 feet above sea level. Cable cars provide a light touch on city infrastructure, and can connect steep neighborhoods where trains are too impractical or expensive. It’s also cleaner and safer than the other alternative—the addition of more crowded minibuses, which will only lead to more streets choked with traffic and pollution.

But the biggest takeaway for riders is that they now feel their city is moving forward, and modernizing in a way that will help it keep pace in the global economy (it’s no coincidence these new lines are being finished in time for an election year). Besides their new perspective-changing commute, the cable cars have given the city a signature method of transportation—which brings residents a sense of pride. [New York Times]

For the full NY Times story, please use this link