One of USAID/Bolivia’s most rewarding project was BOLFOR, it helped realize that our forest is more than mahogany, as more indigenous species were used and the term “sustainable forestry” was first known here. The statistics at that time showed that a hectare and a half of virgin forest were lost to find one mahogany tree, the ratio was that huge loss of forest resources that if managed properly are renewable.

Well, current ochlocracy in government first destroyed the institutionally and eliminated the Forestry Superintendency and did not but to encourage the illegal take over of land by the hands of anarchical groups that were also defined as social movements that are pro this government. 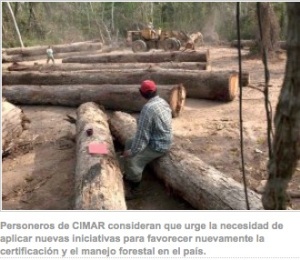 According to director of Cimar, Lincoln Quevedo, social conflicts, occupations by settlers, migration and mechanized agriculture and livestock replacement, are factors in the decline of forest areas.

The territorial invasions by peasants, settlers and pirates, the migration and mechanized agriculture and livestock replacement, made ​​unsustainable forest management in the country, as the area decreased by 50%. For this situation, Bolivia ceased to be a leader in forest certification.

The information was released by the director of the Center for Research and Management of Renewable Natural Resources (CIMAR), Lincoln Quevedo, who stated that “Bolivia was the world leader in forest certification when we had more than two million hectares of forest under the FSC certified tropical system (for its acronym in English referring to the organism: Forest Stewardship Council). Unfortunately, it was declining and now have about 1 million hectares, i.e. we lost 50 percent.”

Quevedo emphasized that forest management also faces several negative factors such as migration and mechanized agriculture and livestock causing forest clearing for greater expansion. An estimated 300 thousand hectares per year in Bolivia are cleared for these two causes.