Inauguration of the Mint House of Potosí 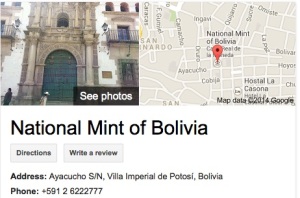 Today is a great day, is the day where the Republic of Bolivia won its independence!

189 years of hard struggle but it is OUR country, OUR REPUBLIC!

Bolivia is a country where the majority of the around ten million people are of mestizo majority, of western civilization culture and mostly Christian society. With most people living in urban settings and with an exceptional environment, so that we receive the description of being under the mega diverse country category [the only ecosystem we lack is the sea-coast which was stolen, taken by force, by the invasion of Chile in 1879]. So, I thought nothing better for this special day, than to translate this article written in 1925:

Inauguration of the Mint House of Potosí

Among the colonial monuments of South America, none more famous after Pizarro’s palace in Lima and the Cusco Dominican convent, the National Mint House of Potosi.

This magnificent monument, a silent witness to a great past greatness, and that has led to so many fables and fantastic versions more or less directly related to the traditional chronicles of Potosi, has indeed, in its stages of evolution, offers points of real interest for the historian.

The first national Potosi Mint building was ordered for construction by Don Francisco de Toledo, Fifth Viceroy of Peru in December 1572, on the site now occupied by the House of Justice, opposite to the main church. It cost the sum of 8,321 pesos, which was ordered to pay by a permit given in Arequipa on September 27, 1575.

After more than two centuries, in 1753, Don Ventura Santelices and Venero, Corregidor / chief justice and superintendent of currency, watching the house coinage hitherto and that the existing facilities were inadequate to meet the demands of the time, decided to build another building with more layers and more extensive.

In the flea-market square is where he built the current Mint.

The construction began on November 8, 1753 under the design and direction of architects Salvador Villa, builder of the mints of Mexico and Lima, and Don Antonio Cabello.

After 20 consecutive years of the building work was completed, its construction having cost the sum of one million one hundred and forty-eight thousand four hundred fifty-two real pesos and six cents (1,148,452.06 rs.), cost the king did exclaim in Spain: “The building must be of silver.”

It is constructed of lime and stone masonry. No holds any architectural beauties, however, is severe and heavy; but the materials, especially timber, are notable for their colossal size, and it be all cedar, carried drag from the borders with Chuquisaca and valleys near the Pilcomayo.

In the first and second courtyard are the head offices; and senior employees of the rooms, taking in one of the corridors the Chapel of the Lord. In front of the grand entrance, on the arc of the second body, stands a huge burlesque and smiling caryatid, carved by Mr. Mouldon French modeler in 1851.

Since the founding of the Mint, the material for the coinage came not to renew it in 1869; and in 1873 was improved by the acquisition of a small press.

The Congress of 1900, at the initiative of Minister Demetrio Calbimonte, voted the sum of Bs250,000 for the renovation of the material, which has been brought from North America and there is currently unused and deteriorating.

Since 1905 it remained closed.

Subsequently, after 1869 to 1909, the manufacturing advanced with technology with steam machinery in 1909 and in 1953 with electrical equipment. Here the famous Potosi monetary cycle is closed.

In the decade of the thirties (twentieth century) the reconstruction of the building of the Mint was launched, which was substantially increased the colonial documentation files with the Prefecture and the Municipality of Potosi.

The Numismatic Museum section of the Mint holds numerous collections of those early years to give birth to the renowned saying: “worth a Potosi” … Those who transit the Mint, evoke the history of America and the world, coming to the conclusion that arriving to Potosí is to meet history to look ahead with a sense of solidarity and preservation of our heritage. (Cultural Foundation BCB).