To those who doubt about THE American Dream … ask Marcelo Claure!

Here is an undeniable truth: the USA is the land of opportunities!

Bolivian entrepreneur appeared on the front page of The Wall Street Journal! The article follows:

New Boss Is an Entrepreneur Who Started and Sold Businesses

Sprint Corp.’s S +0.51% new chief executive is going to stand out in Kansas.

Marcelo Claure is a 6-foot-6-inch Bolivian billionaire who built a global mobile-phone distributor from scratch and had singer Jennifer Lopez perform at his 40th birthday party. Now, he is relocating to the Midwestern suburbs to turn around a 38,000 person company that has spent the better part of a decade losing customers and money. 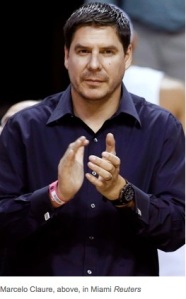 His efforts could determine whether Sprint’s decision to end a $32 billion plan to buy smaller rival T-Mobile US Inc. TMUS +0.32% was a savvy, pragmatic move or a disaster.

While Sprint and Chairman Masayoshi Son were conducting an unusually public campaign for a merger that hadn’t yet been completed, people familiar with the matter said they were also quietly working on a second track: To line up and groom a CEO who could lead an aggressive campaign to win subscribers at an independent Sprint.

Mr. Son, who also is CEO of Sprint parent SoftBank Corp. 9984.TO +0.99% , believes he found that person in Mr. Claure, a like-minded entrepreneur who built a global business with more than $10 billion in revenue and possesses an instinct for taking on big, industry incumbents. He will replace current CEO Dan Hesse.

Sprint’s shares fell 19% to $5.90 on Wednesday, an indication that investors don’t think the company will turn around quickly. Sprint declined to make Messers. Claure, Hesse or Son available to comment.

Mr. Claure first met Mr. Son in Tokyo two years ago, a spokesman said. The meeting was to be a quick one to introduce Mr. Son to Mr. Claure’s company, Brightstar Corp. But as Mr. Claure got to talking about his new program for buying and reselling used phones, Mr. Son got interested and forced Mr. Claure to delay his flight home as they hammered out a deal to launch a used phone buyback program in Japan.

The business was up and running within weeks. Months later, Mr. Claure recalls the date, 12/12/12, the two decided to team up to negotiate better deals when buying mobile devices like smartphones and tablets. The following year, when Mr. Claure was preparing for a roadshow to put all or part of Brightstar up for sale, Mr. Son said he would just buy it himself.

SoftBank paid $1.3 billion for 57% of Brightstar in January and put Mr. Claure on Sprint’s board. SoftBank now will buy the remainder of its shares as well.

The Brightstar CEO has no experience running a wireless operator. Still, owing to his meeting of the minds with Mr. Son, it wasn’t long after his appointment to the Sprint board that Mr. Claure became seen as the “natural choice” to lead Sprint, one of the people said.

Mr. Claure, who continued running Brightstar from his home base in Miami, began making regular trips to Sprint’s headquarters in the Kansas City suburb of Overland Park. He met with Sprint’s executives and studied the carrier’s operations, business plans and finances. 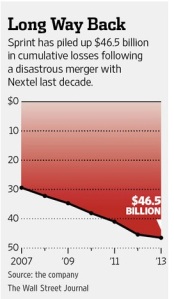 Employees at Sprint wondered why the board member was spending so much time around the company, something they found unusual, one Sprint executive said.

The company never searched for other candidates, the people said. Mr. Claure starts his new job on Monday.

Mr. Hesse, who took over following Sprint’s merger with Nextel, pulled the company back from the brink of bankruptcy and made tough calls to spend billions of dollars stitching together its disparate network technologies and landing the iPhone. But he was never able to shake the company from what Mr. Son has called a “loser” mentality.

Sprint has posted a total of $46.5 billion in losses over the past seven years, much of that as it wrote off its $35 billion Nextel deal, and has shed nearly 2.8 million of the industry’s lucrative postpaid customers over the past six quarters.

“A ‘controlled entity’ like Sprint can be most effective when the majority owner and the CEO are fully aligned and are great partners,” Mr. Hesse said in a goodbye note to Sprint’s staff on Wednesday. “This is the right time in Sprint’s evolution for Marcelo to take the reins and get the most benefit from our relationship with SoftBank.”

In 1995, he bought a cellphone retailer in Boston called USA Wireless and built it into a chain of wireless stores before selling it a year later. At one point, he sold phones out of the trunk of his car by placing ads in the newspaper that guaranteed quick delivery. He would drive around waiting for the orders to come in as a way to get a jump on rivals.

Two years after his first venture, Mr. Claure founded Brightstar, a mashing together of the names of two of the industry’s leaders. It delivers phones from manufacturers’ factories to carriers’ retail outlets.

His Brightstar has carved out a big role buying and selling used smartphones. In Hong Kong, Brightstar has its own auction warehouse where hundreds of people gather to bid on bunches of iPhones, Galaxys and other devices that have been discarded in the U.S. but still have value overseas. Brightstar tried to convert to an electronic format, but buyers like to inspect the phones before putting a bid in an envelope. It built its business in Latin American and expanded rapidly, taking on industry leaders CellStar Corp. CLHI -59.00% and Brightpoint Inc. and eventually doing business in more than 50 countries including the U.S.

“Most of the world cannot afford a new iPhone or a new Galaxy,” Mr. Claure once said. “But once the phone is one day old, it becomes cheaper.” 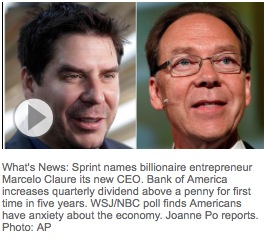 Mr. Claure’s profile has risen with the growth of his company. He owns La Paz-based Bolívar, Bolivia’s top soccer club, and has teamed with David Beckham to bring a Major League Soccer club to Miami. [to watch the video in the picture to the left, use the original link below, thanks]

As Mr. Claure’s stature was growing inside Sprint, top officials were becoming increasingly pessimistic that regulators would allow a deal with T-Mobile. Those concerns hit a tipping point in mid-July, people familiar with the matter said.

Mr. Son, whose confidence in Mr. Hesse had been waning, spoke to him a number of times about his role at the company over the past several weeks, the people said.

Meanwhile, on a July 30 conference call, Sprint told analysts and investors that its network overhaul was “substantially complete” and that it is testing new price plans in preparation for an aggressive push for customers later this year.

The progress on its network overhaul and a viable CEO candidate gave the board the confidence that the company could stand alone, people familiar with the matter said.

The plan now is for Sprint to be a “price leader” later in the year, the Sprint executive said.