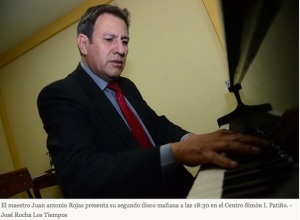 Bolivianísima is one of the instrumental music pieces by maestro Juan Antonio Rojas, presented this Thursday [5/22/2014] at the Patiño Center, along with the album of the same name.

Composing the songs of this work, and make more than 900 pages of sheet music, Rojas has taken four years, including two months of recording at studios Orval Productions, which is a growing business of the Valencia and Ortuño families.

Bolivianísima has “three movements that comprehend Bolivian music and has received a treatment of classical music,” says the author.

“This is not an experiment but a realization of the idea that originally I had to carry Bolivian music to concert halls,” said Juan Antonio.

“The first movement of my Bolivianísima he adds, is a dance that lasts eight minutes. The second movement is a yaraví pace which is a slow dance, to keep the mold of classical music that has a fast moving pace, one slow and one fast again, which also has its philosophical explanation; and the third movement is a carnavalito.”

Explains the composer, also responsible for the arrangements of the last two works of the Trio Apolo, Bolivianísima in addition to classical schemes includes three regions: the little dance  [bailecito] of the valleys, the yaraví of the highlands and the carnavalio of the eastern plains.

In this work and in the concert tomorrow [May 22, 2014], accompanying Rojas (piano), Nelio Zamorano in the first violin, David Trujillo in the second violin, Adrian del Castillo in the viola, Ariana Stambuk (cello) and Wilson Cruz (charango).

“We also have a special guest, Luciel Izumi Espinoza, who is a great composer and charango player. I liked to include in my album very much, her work called Vertiente de Luz [shed light] and she will be a special guest” at the concert.

Thus, Rojas’ second disc is composed by Bolivianísima plus three cuecas, a work that is a fantasy highland called Desde el Faro [From the lighthouse] and the morenada No Me Juzguez [Do not judge me].

Juan Antonio Rojas was born in Oruro and was very close to both Bolivian and classical music as his grandfather was a great worshiper of Bolivian music and played with his friends who played violin and charango.

“He was a fan of Don Fidel Torricos and Delfín Sejas, whose records marked time in Bolivia. I grew up feeding me with the music of these great pianists who performed Bolivian music concert pianos and it was a beautiful experience.”

In addition, says Rojas – who is from many years the piano teacher at the Laredo Institute – his mother, Olga Lazcano, was soprano and responsible for his love of classical music. “At home I always listened Bolivian music and classical music, I think that’s the result that now I may be doing a group of these characteristics,” he says in reference to Q6 Cuerdas Bolivianas [Bolivian Strings Q6], the group that will present tomorrow [5/24/2014] at 18:30 at the Centro Simón I. Patiño, his  new album.

To listen/watch this wonderful music, use this link