By The Heritage Foundation in partnership with The Wall Street Journal:

Bolivia’s economic freedom score is 48.4, making its economy the 158th freest in the 2014 Index. Its overall score is 0.5 point better than last year, with notable improvements in investment freedom and trade freedom offsetting declines in business freedom, fiscal freedom, and government spending. Bolivia is ranked 25th out of 29 countries in the South and Central America/Caribbean region, and its overall score is far below the world and regional averages.

Over the 20-year history of the Index, Bolivia’s economic freedom has deteriorated by 8.5 points, the sixth worst score drop. Significant declines have occurred in six of the 10 economic freedoms, notably property rights and investment freedom, whose scores plummeted 40 and 55 points, respectively. Regulatory efficiency, measured through business freedom, labor freedom, and monetary stability, also has greatly diminished as state interference in the economy has grown.

Bolivia was a “moderately free” economy during the first 10 years of the Index but has been on a downward spiral of economic freedom since 2005. With the economy plunging into the ranks of the “repressed” over the past two years, Bolivians are suffering in a climate of increasing economic subjugation. High commodity prices have driven recent strong economic growth, but long-term economic development remains constrained by institutional shortcomings. 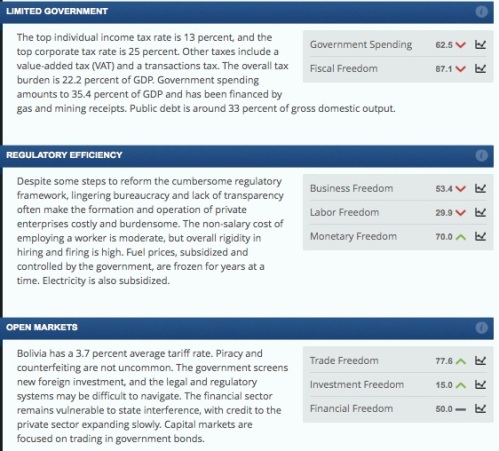 [To make a comparison I picked Peru and the United States, it is undoubtedly evident that Bolivia has gone the wrong path since current coca-grower leader took over the presidency… I remember when Humala run for the 2006 election, I was living in Lima, and everyone making comparisons to what the Bolivian coca-grower was doing… and most people saying “lets not make the Bolivian mistake”, well, for the second time Humala run and won, he clearly did not follow the orders of Chavez and the results below are evident:]

To download the pdf document for Bolivia, please use this link