Hydrocarbons 101: They see inefficient management of YPFB after six years of nationalization

The following article belongs to Hydrocarbons 101, as it assesses the performance of the most important and visible governmental economic policy action. I decided to include two cartoons related to YPFB in the body of the article, which do no interpret or refer to the article per se. They only share the subject: YPFB wanderings… I will write some explanation of those cartoons, inside brackets like [these].

They see inefficient management of YPFB after six years of nationalization

Six years after the process of nationalization of the hydrocarbons, the management of Yacimientos Petrolíferos Fiscales Bolivianos (YPFB) is rated as “poor” and “unsatisfactory”, because there are no tangible results, product investments and executed projects, only “millionaire propaganda” in the media about plans that are perceived as “good intentions”, according to analysts and experts on hydrocarbons: Alvaro Rios and Hugo del Granado.

For Rios, the administrative management in YPFB, despite all the resources and benefits available in the past six years, “is quite poor in terms of execution of budgets in exploration and exploitation;” “in terms of running a series of projects and to show concrete and tangible results to the country”.

“He noted for example that there are no reserves discovered by YPFB in the past six years, the projected plants of urea and ammonia are “white elephants” that do not interest investors and nationalization policy has not been more than to militarize some fields.”

In his opinion, “the only thing that can praise YPFB is having signed the contract of purchase and sale of gas with the Argentina, which is not a project, but a contract;” “because I do not know another project that was carried out with significant investment for the country”, he says and adds that large investments are being done by Repsol (of Spain), Petrobras (of Brazil) or Total (of France), not YPFB. [This cartoon is from El Diario, July 27, 2012. It portrays YPFB’s president, Villegas running away, the pigeon asks “paparazzi?” and he says “no!…journalists!” Corruption inside higher ranks of YPFB caused the media to look after Villegas, and for a while he just evaded press nor did he gave an explanation…]

For Del Granado, corporate-oriented goals in terms of production are far removed from those laid down in the operational Plan 2007-2015. Thus, the production of crude oil, natural gas and condensate for the first quarter of 2012 was 45,190 barrels of oil per day (BPD), far from the corporate goal of 100,000 BPD set for 2015.

The same is true with the loading of crude oil to the refineries of Cochabamba and La Paz totaling 44.421 BPD, far from the goal of 96 BPD and production of natural gas reached 44.38 million cubic meters day (MCD) for the first quarter of this year, compared to the 100 million target of MCD for 2015, according to the January-March 2012 YPFB statistical bulletin.

Del Granado refers regarding that, similarly, investments scheduled for the period 2007-2015, in exploration and production, despite being minimum (8,379 million dollars) in the context of the oil industry, have not been executed not even by 20 per cent to date. 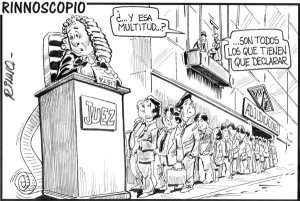 With respect to the program of industrialization, which has a budget of 4,090 billion dollars to implement liquefied plants, Rio Grande and Gran Chaco, and urea and ammonia in the tropics of Cochabamba, in the 2010-2012 period, Del Granado said they are very late and outdated schedule, since none of the potential partners (foreign Enarsa, Brastem, NPCI and Pequiven) showed the slight interest in investing in such projects of industrialization. [this cartoon is from El Diario, July 15, 2012. A long line to see a judge, in the front of the luxurious YPFB offices, two window cleaners talking: “…and that crowd..?” the other says “…they are all the ones who have to declare” on the multiple cases of alleged corruption inside YPFB, this year alone]

In September 2008, the firm Gas To Liquid (GTL) International S.A. delivered to YPFB studies in four blocks: Beni river (La Paz, Pando and Beni), Almendro (El Palmar del Oratorio, Cotoca and Pailas in Santa Cruz), Cupecito (near Charagua, Santa Cruz) and Itacaray (to the South of Chuquisaca, on the border with the gas mega-fields of San Alberto, San Antonio and Margarita).

The directory of YPFB adopted on July 2, 2009 the four final reports of results of study conventions. Law 0278 / 2012-2013, which approves the petroleum services of the Almendro with GTLI area services, was approved in May 2012.

GTL International operated in El Palmar field with service contract for petroleum Dong Won. By the end of 2008, they should have started the drilling of two wells in this field, waiting for a production of 12 million cubic feet of gas per day; but “in the statistics of YPFB, Palmar does not figure as a major producer field”, argues the expert Hugo del Granado.

The site hidrocarburosbol.blogspot.com, dated May 12, 2009, notes that “at the end of March, Jindal (which is the GTL subsidiary) and Bolivian partners started the drilling of the well of El Palmar.”

The deep well that is drilled with a Chinese drill in the town of Camiri, Santa Cruz, has reached the scheduled depth of 6,100 meters without positive results to date. However, YPFB technicians have argued that activities are paralysed since the equipment that they have are designed to work at 10 thousand pounds per square inch (psi) and that the pressure of the depth that they have reached is 15,000 psi.

The explanation does not have consistency, according to expert Hugo del Granado, because it is more expensive to have a standing team of such dimensions as the cost of equipment to operate at high pressures.

On the other hand, the concessional loan agreement signed between the Bolivian State and The Export Import Bank Of China (Eximbank), totalling 411 million “yuans” was approved in November 2011, through Law 187, equivalent to $60 million dollars to finance the “project of procurement of drilling”; but “to July 2012 is there is no information on the use of this credit”, adds Del Granado.

Between 2006 and 2011, production of natural gas in Bolivia was virtually stagnant, mainly due to the lack of investment in exploration and exploitation and the constant fall in Brazilian demand.

Analyzing the official statistics of YPFB, we can note that between 2006 and 2011 the average production of natural gas in Bolivia increased only in 0.8 million cubic meters per year, that increase could well be symbolic, and clearly reflects the lack of investment in exploratory activities which would allow to discover, replenish and increase the proven reserves of natural gas in Bolivia.

The average production of the year 2006 was 40.20 million cubic metres per day (MCD) and reached 45.07 million MCD, according to HidrocarburosBolivia.com, with data from YPFB Corporation in 2011.

It should be recalled that the current hydrocarbons law was enacted in 2005, within the framework of a political Constitution of the State (CPE) that is not already in existence. Thus, the lack of a “new” compatible hydrocarbons law with the “new” CPE and a coherent and attractive regulatory framework are the main factors hindering the arrival of investments for the Bolivian hydrocarbon sector.

An increase in gas production by investing in Margarita which, incidentally, can be perceived only after 2012 occurred in function to the warranties set forth in the addendum signed by YPFB and Enarsa, in 2010.

Until now, Bolivia did not have the ability to meet their unique two export markets permanently and simultaneously. With a capacity of current production that reaches 54 million of MCD, that problem would be solved; However, remaining industrialization projects remain pending, changing the energy matrix to massively the use of natural gas and the supply of gas to the steel industry in El Mutún.

To meet these objectives is required to further increase the production of gas and this will not be possible without major investments, and as it is well-known, these investments are subject to the Government offers of clear and transparent rules, something that sounds easy; but for the fact it is not.