Tonight (7/11/12), El Deber website published some highlights on Veja’s reaction from Bolivian government’s reaction. I went into Veja’s website and tried to translate the whole report, please bare with my Portunglish… 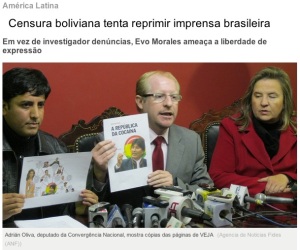 Not satisfied in repressing the press in its own territory, the Bolivarian Governments begin to show their claws against freedom of expression even in neighbouring countries. This week, after the publication of the Republic of cocaine, in Bolivia they threatened to sue the magazine for revealing documents that link Bolivian authorities with a Brazilian drug trafficker. About instructing to investigate such complaints, nothing was said.

Use this link to read such report.

The story of Veja, written by editor Duda Teixeira, is based on reports produced by a Bolivian police intelligence unit that reveal a direct connection between the man of confidence of Evo Morales, the Minister of the Presidency Juan Ramón Quintana, and a drug dealer that currently serves time in the maximum security penitentiary in Catanduvas, Paraná: Maximiliano Dorado Munhoz son.

The documents leaked to Bolivian and American press by a political member of the movement to Socialism (MAS), the Morales’ [political] Party. According to them, Quintana, when he was Director of the Agency for the development of macro-regions and border areas, in 2010, he was with Jessica Jordan, famous in the country for having been elected miss Bolivia four years earlier, in Dorado Munhoz’ house, then extradited [Dorado Munhoz].

Impact – on Tuesday 10th, in an interview to the press of his country, the Bolivian Senator Bernard Gutiérrez confirmed the information contained in Veja’s article. Gutiérrez declared to Bolivian Pio XII radio that he and his colleague Roger Pinto had already delivered “personally” to President Morales, in 2011, some documents received by their political party, that link two senior government officials to drug trafficking and which confirm the data published by VEJA. “Morales has this information and did absolutely nothing with them,” said Gutierrez. Indigenous representatives also asked for explanations to Álvaro García Linera on the report. For them, if has any dignity, Quitana should resign and submit to courts of Bolivia and Brazil.

Showing copies of the pages of Veja’s report, the Deputy of National Convergence Adrian Oliva also stated in a press conference that this is the chance to clarify the links of Morales Government with drug trafficking and recommended the formation of an International Commission to investigate the complaints. The same Congressman recalled on Friday that Roger Pinto had given an interview to the Bolivian Red Uno channel about the strange relationship between Quintana and Dorado Munhoz.

The newspaper El Dia, of Santa Cruz, confirmed this Tuesday’s Edition, based on information from the FELCN (special force to combat drug trafficking, the Bolivian police), that address quoted in report of Veja was the home of Dorado Munhoz.

Threats – on Monday, the Minister Quintana said in news conference that “will appeal to the courts in Brazil through our Embassy” and “ask Veja to proof that the Bolivian authorities are involved with drug trafficking.” He denies knowing Dorado Munhoz or have met with the dealer. “We ask for tangible evidence, clear evidence,” he said. The report of the Bolivian police intelligence unit States the following:

“On the date 10/18/2010, at 2:00 pm, it was verified that, there is the entry of two people from Government, Mr Juan Ramón de la Quintana and Miss Jessica Jordan, which went inside without porting anything on their hands, staying at that house for about twenty minutes, leaving the residence at the end of this time, carrying two suitcases, ‘Executive’ type, leaving towards the inner ring, between Beni and Alemana avenues, without us following them, due to the lack of personnel and being the priority control of the domicile of Maximilian Dorado. ”

In the same report, the Bolivian agent, commenting on the procedures for arrest Dorado Munhoz, expresses his concern at the possibility that the influence of drug dealer along with members of the judiciary and the Government interferes with the operation. Therefore, the police decided to inform only the geographical coordinates of “Max’s” house to the judge that would later give the arrest warrant:

“On the date 12/28/2010, the order of seizure to the residence of Maximilian Dorado is given, without knowing the address of the same, only putting the coordinates for satellites, since it is known that this citizen has many contacts in the judiciary, prosecutors, Government people, in addition to members of the FELCN, which could give warning if someone is coming into his home.”

Emergency diplomacy – on Wednesday, the Government of Bolivia named as new Ambassador to Brazil, to the Socialist Jerjes Justiniano with the express mission, to reduce the impact that the report Veja caused to the Bolivian Government. At a news conference in La Paz, Justiniano said he will ask for a “disavowal” to Veja, adding that, otherwise, will take to court the magazine. “It is a responsibility that I have to take immediately, because State officials are involved,” he said.

According to Justiniano, is “absolutely secondary” the case of Senator opponent Roger Pinto, a refugee for more than 40 days in the Brazilian Embassy in La Paz. The Senator cannot leave Bolivia because the Morales Government does not grant a safe-conduct requested by Brasilia. Pinto, whom the Brazilian Government granted asylum in early June, is the target of political persecution by Morales, like many other opponents that are held or sought refuge abroad.