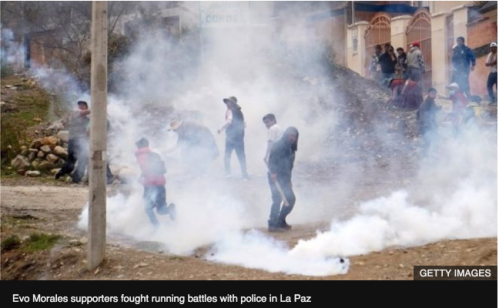 There have been clashes in Bolivia after the resignation of President Evo Morales following a disputed election.

At least 20 people were injured as Morales supporters battled with police in the cities of La Paz and El Alto, local media report.

Mr Morales, 60, accused the police of targeting peaceful protesters and urged Bolivians to resist the “dark powers” that had forced him to resign.

Others have been celebrating his departure after nearly 14 years.

Mr Morales, Bolivia’s first indigenous leader, stepped down on Sunday after the head of the army publicly called on him to leave his post.

But he struck a defiant note on Twitter on Monday, saying that “the Bolivian people have never abandoned me and I will never abandon them”. He has also said that he was the victim of a “civic coup”.

The deputy head of the Senate said she would take over as interim president until new elections were held.

US President Donald Trump on Monday described the resignation of Mr Morales as “a significant moment for democracy in the Western Hemisphere”. 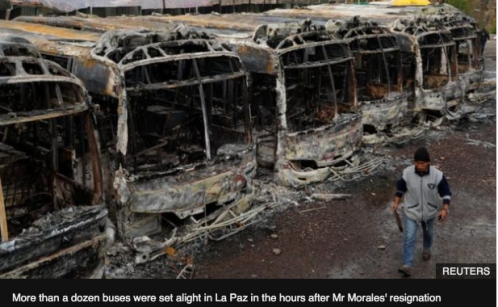 In a statement, Mr Trump said the US “applauds the Bolivian people for demanding freedom and the Bolivian military for abiding by its oath to protect not just a single person, but Bolivia’s constitution”. 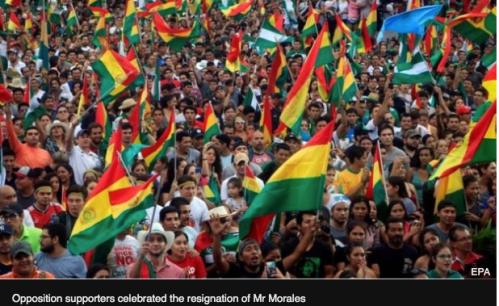 The Russian foreign ministry said “the wave of violence unleashed by the opposition didn’t allow the presidential mandate of Evo Morales to be completed”.

Mexican Foreign Minister Marcelo Ebrard said events in Bolivia constituted “a coup because the army requested the resignation of the president, and that violates the constitutional order of that country”.

Mexico also offered asylum to Mr Morales but it is not yet known if he has accepted.

Mr Morales, a former coca farmer, was first elected in 2006. He has won plaudits for fighting poverty and improving Bolivia’s economy but drew controversy by defying constitutional term limits to run for a fourth term in October’s election, which is alleged to have been rife with irregularities.

That is not entirely clear at this point, adding to the volatile nature of the situation. The deputy leader of the Senate, Jeanine Áñez, said she would assume power as interim leader until elections were held. 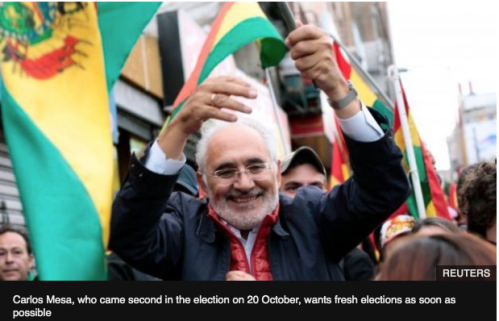 Ms Áñez made the announcement after Vice-President Álvaro García, Senate leader Adriana Salvatierra and House of Deputies’ leader Victor Borda had all resigned, leaving her next in line to take over power temporarily.

“I assume this challenge with the only objective to call new elections,” she said. “This is simply a transitional phase.”

The opposition politician said she would convene the legislative assembly later on Monday to be confirmed as interim president.

But with Mr Morales’ party in control of both the Senate and the House of Deputies it is not clear if she will get the necessary backing from legislators.

Under Bolivia’s constitution, whoever takes over as interim president has 90 days to call fresh elections.

The biggest criticism of Evo Morales was his lack of respect for Bolivia’s democracy – accused of overstaying his welcome and refusing to step down.

But the fact that the military has called the shots on the president standing down does not do much for Bolivia’s democracy either.

Now Evo Morales has gone, there is a power vacuum. Increasing numbers of his Mas party are resigning, and it feels like there is a need for retribution – for Evo Morales and his people to pay the price for the mistakes they made while in power.

His supporters have called this a coup – his detractors the end of tyranny. The priority now is to choose an interim leader, call new elections and bring a polarised Bolivia together or face yet more unrest and violence in the coming weeks.

What prompted his resignation?

Pressure had been growing on Mr Morales since the presidential election on 20 October. Tensions first flared after the results count was inexplicably paused for 24 hours. The final result gave Mr Morales slightly more than the 10% lead he needed to win outright, giving him a fourth consecutive term.

On Sunday, the Organization of American States (OAS), a regional body, announced that its audit of the election found “clear manipulation” and called for the result to be annulled. 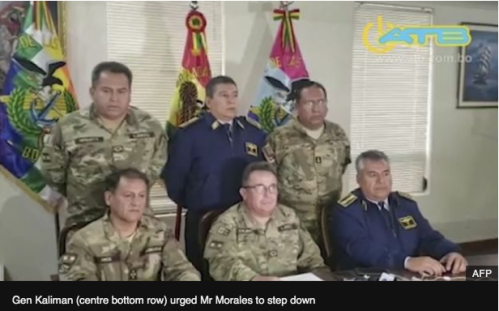 In response, Mr Morales agreed to replace the electoral authorities and to hold fresh elections. But his main rival, Carlos Mesa – who came second in the vote – said Mr Morales should not stand in any new vote.

But what really seemed to tip the balance was the intervention of the chief of the armed forces, General Williams Kaliman, who urged Mr Morales to step down in the interests of peace and stability.

A number of Mr Morales’ close allies then announced their resignations, further heaping pressure on the president, triggering his resignation.

What has been the reaction?

Opponents of Mr Morales took to the streets to celebrate, setting off fireworks and waving Bolivian flags. 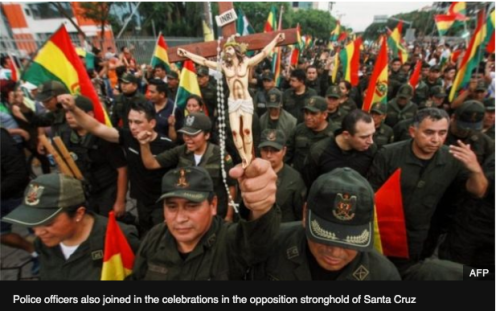 But there were also instances of looting and 15 buses were set alight in the main city, La Paz. The houses of opposition politicians as well as that of Mr Morales reportedly came under attack. 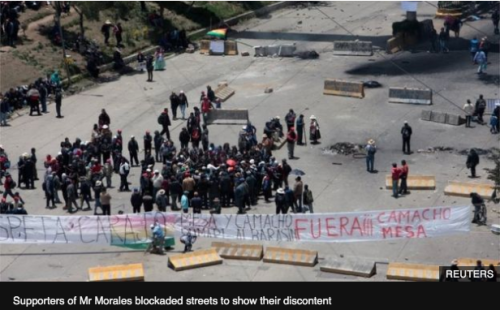 Both Mr Morales and Mr Mesa have called for an end to the violence. [Bolivian Thoughts opinion: I was forced to watch evo’s peroration, long, boring, like he was giving his yearly report, and then he said was quitting office, he said that he still felt he won the election, he just never mentioned that OAS audit determined that a new election should take place, ergo, fraud! During that boring speech, he said he wanted to call for a dialogue, that people should calm down … well, at that precise time, his hordes were shooting buses filled with miners. Three miners were severely injured by evo’s snipers … so much for this evil crook!]