Allegations that the governing party rigged the Oct. 20 election have sparked violent protests and calls for a new election. 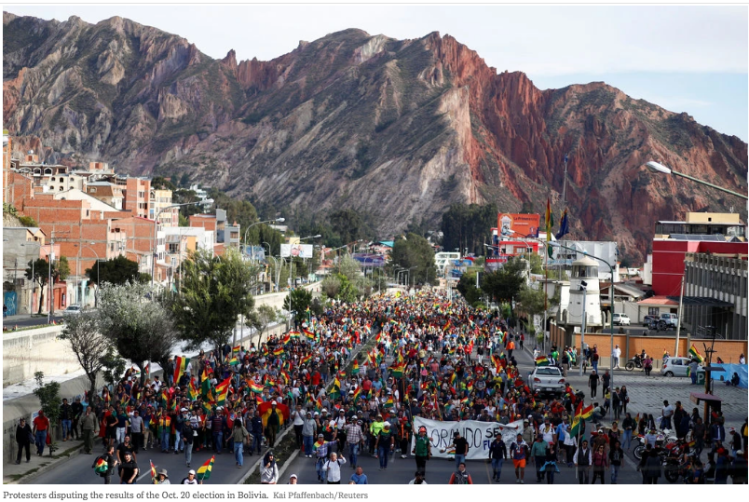 LA PAZ, Bolivia — Tension over Bolivia’s disputed presidential elections escalated sharply this week as a protest that turned violent left two people dead, and a sizable segment of the armed forces warned that they would not crack down on demonstrators on behalf of President Evo Morales.

As the impasse over who gets to govern the country devolves into broader violence, Bolivia’s young democracy is facing a pivotal test.

Mr. Morales, Bolivia’s first indigenous president, claims he won a fourth consecutive mandate in the Oct. 20 election. But opponents say the vote was marred by systematic fraud and have taken to the streets to protest.

On Thursday, with much of the nation paralyzed by demonstrations, strikes and blockades, a team from the Organization of American States began an audit of election records.

“We find ourselves in a volatile and uncertain moment,” said Marcelo Arequipa, a political analyst in La Paz, the capital. “Perceptions and emotions are stronger than facts, so that is what we’re being governed by.”

At the same time, Mr. Morales called on supporters to stifle protests by cutting off access points to cities, a provocative tactic that curtailed the movement of people and goods across the nation this week.

As anger against Mr. Morales has swelled, many in the opposition have shifted from calling for a runoff between the president and his main challenger, Carlos Mesa, to demanding the ouster of Mr. Morales, who has been in office since 2006.

Their rage simmered after two anti-government demonstrators were killed Wednesday in the city of Montero in Santa Cruz province, after a rampage of gunfire that left several other people wounded. It was not clear who opened fire on the demonstrators.

“Bolivians are upset over fraud and we will not be silent in the face of injustice,” said Diego Tamayo, 26, a university student leader who has been protesting against the government. “Never in my life have I seen a mobilization of this scale.”

It seemed uncertain that the audit would ease tensions.

Mr. Mesa has said he does not see the audit as a viable way to resolve the dispute and has urged his supporters to remain mobilized on the streets.

Mr. Arequipa, the La Paz political analyst, said that as a growing number of Bolivians have become convinced that the election was rigged, they are engaging in acts of civil disobedience not seen since an outbreak of political violence in 2003 that paved the way for Mr. Morales’s first victory.

Despite the protests, Mr. Morales retains broad popular support. Yet a letter released by members of the armed forces on Wednesday night signaled a striking level of dissent among midlevel military officers.

The letter, which is unsigned, asserts that it represents the views of 2,933 officers from the Army, Air Force and Navy. It warns that the armed forces are unwilling to crack down on anti-government demonstrations.

“The armed forces of the state will never take up arms against the people,” the officers said in the letter, which was addressed to Mr. Morales and the top leaders of the military. “Our weapons will only be raised to defend our people, our Constitution and our laws.”

The letter pointedly noted that Bolivia’s constitution limits presidents to serve no more than two consecutive terms, wading into the fraught political and constitutional debate over the legitimacy of Mr. Morales’s quest to remain in power.

After Mr. Morales was elected in a landslide in 2005, his government oversaw the drafting of a new constitution that allows presidents to serve no more than two consecutive terms.

Mr. Morales argued that his two-term limit should start with his second election. Then, in 2016, he put forward a referendum seeking to do away with that limit.

Voters rejected that proposed constitutional amendment. But the next year, Mr. Morales got the country’s constitutional court, which is packed with government loyalists, to sign off on his fourth presidential bid anyway, issuing a controversial ruling that concluded that term limits infringe on basic human rights.

Isabel Mercado, the director of Página Siete, a leading newspaper in Bolivia, said the country was dangerously polarized as opposition to Mr. Morales has become broader and more radical.

“The nation is divided like never before,” she said. “I think the government will either be forced to convene new elections or it will have to ramp up repression.”

Mr. Morales on Thursday called on supporters to halt the siege of cities, a measure he called for last weekend.

“It’s very painful to see clashes between Bolivians,” Mr. Morales said during a televised address. “At the end of the day, we’re a family.”

Mr. Morales is supporting the audit by the O.A.S., a Washington-based multilateral organization that includes most countries in the Americas.

“We have nothing to hide,” Mr. Morales said Thursday, adding that he welcomes an independent assessment over “whether there was fraud or not.”

O.A.S. monitors have expressed alarm over the fairness of Bolivia’s election, arguing that the ruling party improperly used state resources during the campaign.

The observer team cast doubt on the integrity of the vote tallying process. After polls closed on Oct. 20, Bolivia’s electoral tribunal released a preliminary vote count that suggested Mr. Morales had fallen short of the 10 percentage point lead he needed to avoid a runoff.

When results were updated the evening of Oct. 21, Mr. Morales’s fortunes had turned, and the final vote put him just barely across the threshold needed to win outright.

That set off a wave of protest and acts of vandalism targeting electoral offices in several cities.