In his well-rehearsed melodramatic voice, current Bolivia president always like to say “I am learning, I did not know…” … over and over we heard this, through a “learning” decade, that Bolivia has lost, over $150 billion of our dollars were wasted.

Now, the news of a failure, due to irresponsible demagogue and plain incompetence takes place. There was never in history, that a political group received and honored this mention: ochlocracy, and that is what the leader of the illegal coca-crop and his masistas really are!

Government closes the construction of the Army 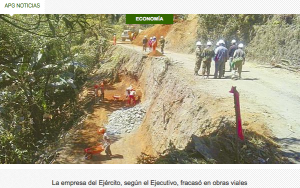 The military company failed to execute the works that were awarded to them.

The President Evo Morales instructed the decommissioning of the Army Construction Company (ECE), for lack of results in the works entrusted to it.

“That company has not worked. It will be closed, as it was ordered by the President, those companies that are not profitable will be eliminated, will be closed”, said yesterday the Minister of Public Works, Milton Claros.

Under this authority, the Ministry of Defense, which oversees the ECE is evaluating the pending projects, as many were unfinished and after that process, assets and liabilities may be transferred to another company.

Claros prefers that the beneficiary will be the Bolivian Strategic and Conservation Construction Company, which reports directly to his ministry and that “has good results.”

The General State Budget (PGE-2015) gave the ECE, a total of Bs38,890,302 for expenses without projects and for the administrative and financial management.

In recent months, the ECE, under the Army, could not realize the construction of the road Unduavi-Chulumani Sud Yungas of La Paz, nor the road from Los Lotes to Rio Grande in Santa Cruz.

Both the Bolivian Highways Agency (ABC) and YPFB have rescinded their contracts.

Despite the insistence since January, an explanation was avoided by the Army Command, they avoided giving information so far. Its communication department headed concern to the Ministry of Defense, which did not give any any information either.

In January, defense officials claimed that the company Army engineers had no experience.