WILL BE IN THREE CITIES

POPE TO VISIT THE COUNTRY FOR THREE DAYS

La Paz. Yesterday it was learned that Pope Francis will come to Bolivia between July, 6 and 8 and will visit three cities. 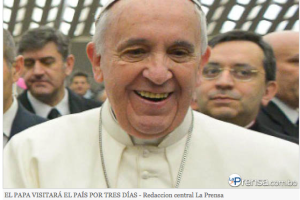 According to the known facts, the Supreme Pontiff of the Catholic Church, will begin his stay in Bolivia in the city of Santa Cruz on July 6, on the 7th will pass to La Paz and on the 8th, to Tarija.

The papal visit was announced twice by President Evo Morales. [cheap politics/demagogue to boost his own image, as in almost over a decade, he wasted over $150 billion dollars and has nothing to show now that the international prices are going down…]

The arrival of Pope Francis to Bolivia generated susceptibility on Chilean authorities because of the possibility to intervene at the request of the country in the maritime claim raised by the State before the International Court of Justice in The Hague.

Ecclesiastic position. At the time, the Catholic Church announced that “the General Secretariat of the Bolivian Episcopal Conference, with joy, communicates the Bolivian people that every day is closer the possibility of the visit of Pope Francisco to Bolivia during the year 2015”. It was clarified that the visit will have pastoral character.

I thank God for this visit and pray that current socialist/communist/polytheist group of individuals in power,  led by the coca-grower caudillo stay out of this extraordinary visit!

Pope Francis has decided to visit Bolivia because of the large Catholic population in Bolivia Because we need his blessings and prayers, NOT, repeat, NOT because the occasional president wanted.

The latter, the one who received more votes than actual people registered to vote,  has shown over the years a disproportionate egocentrism that borders insanity. Thus, we, the people do not want cheap politics to interfere with this wonderful visit!!