ENATEX DEBTS FROM VENEZUELA ARE INVESTIGATED! 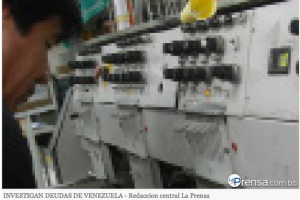 Democrat Unit Congressman, Wilson Santamaría, reported that investigates the debts of the Government of Venezuela with some state enterprises, such as the Public Company National Textile (Enatex), which faces several economic problems that led to its almost 1,700 workers decide to mobilize to demand that the four pay them wages owed to them.

On this, the opposition assemblyman said the government of Evo Morales kept complicity silent by not claiming the debt of his Venezuelan counterpart when he visited the country to participate in the acts of possession. The former Minister of Productive Development, Teresa Morales, said the delay in payment of the Venezuelan customers to the state company is due to a long and cumbersome process.

Current gov’s stubborn hatred towards capitalism [just a demagogue posture as he as the top leader of the illegal coca crop of the Chapare, leads an organization that moves along the crudest capitalistic form of engaging in illegal plantations and value added product that fuels international narcotrafficking] and the “empire” has led our country to lose the best textile private company and the best possible market to our textiles.

The masismo leaders who do brag about belonging to the socialism of the 21st century and being part of the Alba countries, at the time of losing the ATPDEA with the US, and at the time of forcing the bankruptcy of the private textile company, have referred to the “great” Venezuelan market… we’ll, here the results speak for themselves.

The ruling ochlocracy has so far wasted over a decade of our nation and wistfully misused over $150 billion dollars of our best economic time in our history.