Residents living in the vicinity of the airport ensure that shortly before landing the plane was already with smoke and descended with instability. 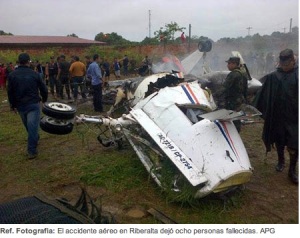 Aircraft company Aerocon suffered a serious accident yesterday Sunday [November, 3, 2013] on the runway of Riberalta airport, it would already have suffered the loss of one of its engines when it was in the sky since witnesses living in the area close to the airport, saw the airplane emitting smoke and began to awkwardly go down to earth.

Erbol network interviewed residents of the area who were those who saw the plane in the air moments before causing the serious accident in which eight people were killed and 10 others were seriously injured.

“I was watching the arrival of the aircraft, it was not normal what happened. I saw how from one of its engines, went out a lot of smoke, also [was approaching] not down straight. When touched the strip, it track a little and then went to the right against the bushes”, told one of the witnesses to San Miguel, Erbol radio network.

The black box of the plane will finally be revealing the exact causes of the accident in Riberalta, referred the Directorate General of Civil Aviation, which will today [11/4/13] pick up the drive that contains the recording of the flight, as well as the various parameters which was the travel, speed, pressure changes and the mechanical condition of the aircraft.

As a report states from the AFP agency, the civil aircraft, which had suffered damage in one of its engines, it left the runway and crashed into the bushes in the place where it caught fire, said witnesses to local media. Part of its fuselage broke, as well as its wings.

Ernesto Suárez, former Governor of the Department of Beni, reported on his Twitter account that “three officials in the governorate of the (SEDEGES)”, Social management departmental service, died in the accident, while other three officials of the same office “saved their lives”.

The list of injured and fatalities can be seen in the attached link, from Los Tiempos, at the end of that report: