To me, the reaction of current Bolivian president fits within the union’s ‘culture’ in Bolivia. People in the board of a syndicate can not be fired, they are asked to leave because they were not hired, they were elected. When that happened, many people said the president lacked managerial skills, why he had to embarrass the minister in front of all the public, why he couldn’t have spoken one-to one and many other things… to me it is just the way he is accustomed to… the coca grower union way…

Authority. Several leaders of El Alto are candidates to replace Felipe Quispe Quenta. On this day you could meet the new minister. There is criticism from the opposition. 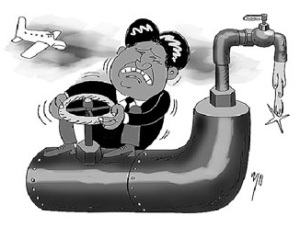 As requested by President Evo Morales, yesterday morning, the Minister of water and environment, Felipe Quispe Quenta, presented his resignation and is expected for today that a new authority will be sworn-in, of which no one knows the name but knows its origin: the city of El Alto.

Last night, government authorities confirmed the departure of Quispe, after that on Sunday the head of State asked publicly his resignation after accusing him of having lied about the provision of water and electricity to the airport of Uyuni [Potosi].

Morales drew attention again to his Minister, the first time was in his message to the nation when he admonished Quispe by not reaching the goals laid down with regard to access to drinking water; Sunday was the second and last that it cost him the post.

Deputy Minister of environment, Beatriz Zapata, said that yesterday, there were no meetings held with the minister of water throughout the day, until she went to the Parliament to attend a meeting with Assembly members on the law of the productive decade.

Consulted on whether the change may affect the work of this Ministry, said: “do not affect, I do not think, but we should not think in a negative way, any change leads to improvement;” “from the revolutionary point of view, always think going forward”.

From her perception, if the Chairman called the attention, “probably do it with background, facing a change and looking for an improvement”. Although she said that she, personally, did not know of the resignation of her immediate superior.

Quispe is a ‘quota’ that belongs to El Alto and in fact yesterday leaders of the Federation of neighborhood joints (Fejuve) and the Regional workers’ Central (COR) declared on the ‘need’ to arrange to deliver a list of three to President Evo Morales and he can choose the substitute.

The Executive Secretary of the El Alto COR, Remigio Condori, confirmed that the Ministry should be commanded by a leader of this city. “We wouldn’t want to lose that Ministry because El Alto deserves it and I think that the claim on issue of water fight is important”, added.

The leader of Fejuve, Javier Acno Fernández, colleague [of the latter] said that they as leaders will do make ‘respect’ the space they have inside the Cabinet of Evo Morales. “We have always said that we are going to enforce this quota to El Alto.” El Alto has given many lives for this process, then it has always been managed by an Alto; “therefore we will enforce,” he warned.

Thus, the leaders revealed the existence of struggles within El Alto institutions to command this Ministry, which previously already had two authorities of that city, but none of them were protagonists in their respective portfolios.

Abel Mamani, who was the first Minister appointed in this portfolio, was leader of the Fejuve, but left the office following the publication of photos that caused a scandal within the own executive power; Finally, Mamani was ignored by the MAS and decided to join the MSM’s leader.

The other El Alto Minister was Mabel Monje, who played a discreet role and did not perform tasks that have excelled; on the contrary, on two occasions, in 2011, two districts of El Alto residents mobilized to the city of La Paz demanding attention to the provision of water in the Alteños neighborhoods, these protests caused the change of this authority.

– There are two candidates to replace Felipe Quispe Quenta, there is two former leaders of the COR and the Fejuve from El Alto.

– The first is Claudio Luna, who had chaired the COR in the past. The other can be Rubén Paz, which is one of the former Presidents of the Fejuve; although Remigio Condori is also pushing for that position.

– But the Alteños can not decide alone, farmers have the ‘right to vote’, and therefore may support one of the bids.

– The personal data of the former Minister Felipe Quispe was removed from the portal of the Presidency [website], which contains the entire Cabinet.

– The resignation was confirmed after the arrival of the Vice President at Government Palace, 17:00; it was known that Quispe hoped to be received by the leaders [both P and VP] since noon.

– The Mayor of Uyuni Froilán Condori, justified the former Minister and said that there is water at the airport, but due to the cold weather, was not leaving the taps.

– The MSM said, through his spokesman, Edwin Herrera, that Quispe’s exit denotes an imperial attitude of the MAS, usual “rolling heads” of their vassals. 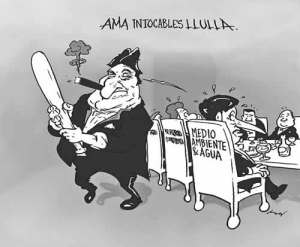 Title mix between Quechua and Spanish saying “untouchables, DO NOT LIE”

Current president is about to whack a Pinocchio-like minister of environment and water..

… and that is how current government manages its cabinet of ministers… 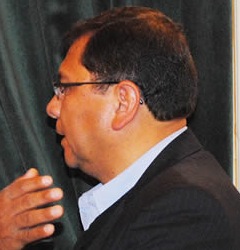 While the news gives details already covered in the above news, say nothing about the professional or origin background of the new minister.

The El Alto ‘quota’ is yet to be confirmed…

For the full Spanish article, please use the following link:

What worries me the most is not the imperial attitudes of current president but the way some cities and/or social movements believe they have ‘quotas’. Instead of looking for the best possible person for a given position, they are filled by whoever shouts and complains the most…