This type of news lifts our spirits, a Bolivian lady mastered the streets of lovely London, kudos to her and her family! I know it is hard to leave our country but it has to be done sometimes, it takes special people to be successful abroad, and she is certainly successful!

The Bolivian owner of the streets of London

A report by the BBC World teaches the work of a Bolivian four years working as a public transport bus driver. Maria, who was born in La Paz, said misses her country. 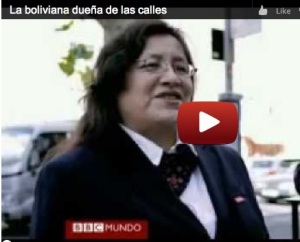 Identified only by the name of Maria [if you want to see the Spanish video, go to the link below from El Deber or click at her name, just below, as the video plays her last name appears, she is Maria Rios], this Bolivian tells the cameras of BBC World, arriving from the city of La Paz London 22 years ago. With her work as public bus driver, this Bolivian says London streets are at her fingertips.

“From her huge bus, this Bolivian witnessed up-front the tremendous changes that lived the British capital during the Olympics.” “The change was not easy, but Maria says that it was also not difficult to get a driver’s license and enjoys her work, where she affirms, can meet very different people”, publishes the BBC World. [I didn’t hear the reference to the Olympics in the video, there must be another source of info provided by the reporter. However, she misses her relatives, friends, speaks about how chaotic streets are in London and also says how peaceful is in Bolivia. In a word: homesick, and that makes more important the fact that she is defying all the above, is a proud worker, a proud Bolivian, like so many others who live abroad]

Kudos for Maria Rios and thanks to the person who sent this news to El Deber. Maria Rios is in The Hall of Bolivian Fame

This entry was posted in Bolivia, Business and tagged London, Maria Rios. Bookmark the permalink.