The world’s most dangerous road

A drive down Bolivia’s infamous “Death Road” takes travellers into a world where two resources have provoked fascination, misunderstanding and controversy for centuries: coca and gold.

After cresting the 4,800m Cumbre pass, the trufi (shared taxi) plunged into a cloud of swirling mist. Inside the vehicle it felt strangely peaceful, as if we were trapped in a bubble, which was perhaps for the best given we were travelling along the “Camino de la Muerte”, or Death Road.

Running from the high-altitude Andean city of La Paz to the subtropical Yungas valleys and the Amazonian lowlands beyond, the 64km Yungas Road involves a sharp 3,500m descent. Parts of the highway are only 3m wide; there is a series of sharp turns and blind corners; and mini waterfalls splash down the surrounding rockface. Safety barriers make only a rare appearance – far more common are roadside shrines: white crosses, bunches of flowers, yellowing photos.

During the 1990s, so many people died in accidents on the highway – built by Paraguayan prisoners of war following the catastrophic Chaco War (1932-35) – that the Inter-American Development Bank described it as “the world’s most dangerous road“.

The trufi slowed to a crawl and the driver hunched forward, peering intently over the steering wheel as if at an eye test, before we suddenly emerged into the sunshine. Outside my window was a near-vertical 1,000m drop, while on the opposite side a motorbike whizzed past, clipping our wing mirror. Just ahead, a trio of cyclists gingerly navigated a crater-sized pothole: although a bypass has been built around the most perilous stretch, the road’s macabre reputation has made it something of a tourist attraction and it attracts a steady stream of travellers eager to ride down it.

The route is also the gateway to an overlooked region with powerful associations. The Yungas (“warm lands” in the indigenous language of Aymara, spoken by around 1.7 million Bolivians) are a fertile, remarkably biodiverse transition zone between the Andes and the Amazon, closely linked to two resources that have provoked fascination and reverence, misunderstanding and controversy: coca and gold. 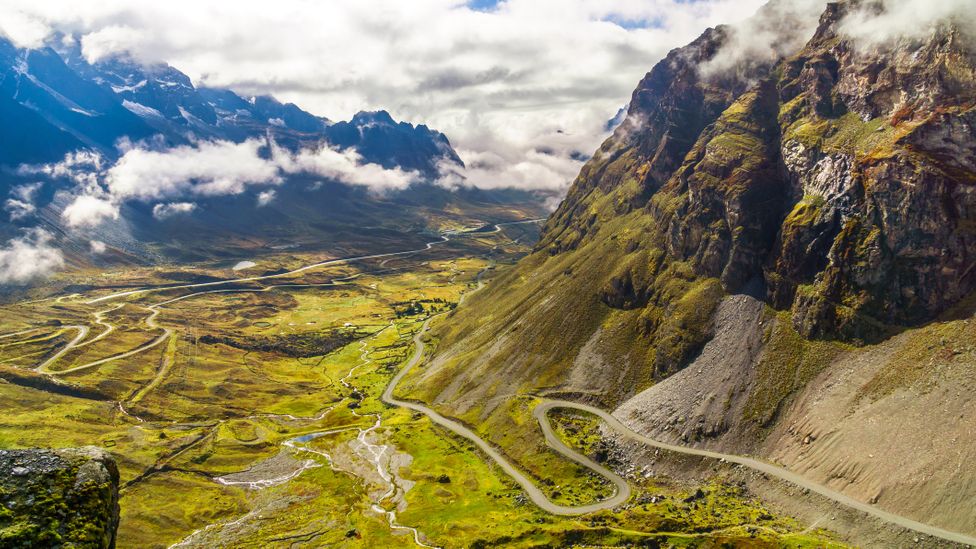 The route was constructed by Paraguayan prisoners of war in the 1930s to connect La Paz with the Yungas and the Amazon (Credit: Streetflash/Getty Images)

After two hours on the Death Road, we pulled into Coroico, once a gold-mining hub, now a languid resort town. Wedged into an emerald-green slope, it has a balmy climate and panoramic views of undulating hills, along with good-value places to eat, drink and sleep. Coroico is a difficult place to leave, but after spending a day recovering from the nerve-wracking journey, I headed into the surrounding countryside to learn more about how the region has helped to shape modern Bolivia.

Coca has been central to many South American cultures for millennia

Rich soils and plentiful rainfall have made the Yungas, which run along the eastern slopes of the Andes, an agriculture centre. Criss-crossed with ancient trading routes once plied by llama caravans, the region was a breadbasket for the Inca and earlier empires such as the Tiwanaku. This tradition continues today. As I hiked along a centuries-old trail towards the Río Coroico, I passed hillside terraces planted with coffee, bananas, cassava, guavas, papayas and citrus fruits. There were also bushy plants with slender branches, oval-shaped leaves and reddish berries: coca.

Coca has been central to many South American cultures for millennia, and Bolivia is one of the continent’s biggest producers, with hundreds of square kilometres devoted to the crop, two-thirds of which are in the Yungas. High in vitamins and minerals, the leaves act as a mild stimulant and help to offset altitude sickness; stave off hunger, thirst and tiredness; aid digestion and even suppress pain. For as long as 8,000 years, they have been used in religious ceremonies, and as a medicine, currency and social lubricant.

The Spanish initially demonised coca. But after realising the beneficial effect it had on the indigenous peoples forced to toil in mines and on plantations, the colonial authorities had a change of heart and commercialised the crop. Interest in coca slowly grew beyond the continent. The first English-language reference is believed to be Londoner Abraham Cowley’s 1662 poem, A Legend of Coca:

Endow’d with leaves of wondrous nourishment,
Whose juice succ’d in, and to the stomach tak’n
Long hunger and long labour can sustain

During the 19th Century, coca – and its psychoactive alkaloid, cocaine – proved increasingly popular in Europe and North America, featuring in drinks, tonics, medicines and various other products. They included Vin Mariani, a French wine with more than 200mg/litre of cocaine. Adverts claimed it “refreshed body and brain” and fans included Thomas Edison, Ulysses S Grant, Emile Zola and Pope Leo XIII (who even appeared on a promotional poster). 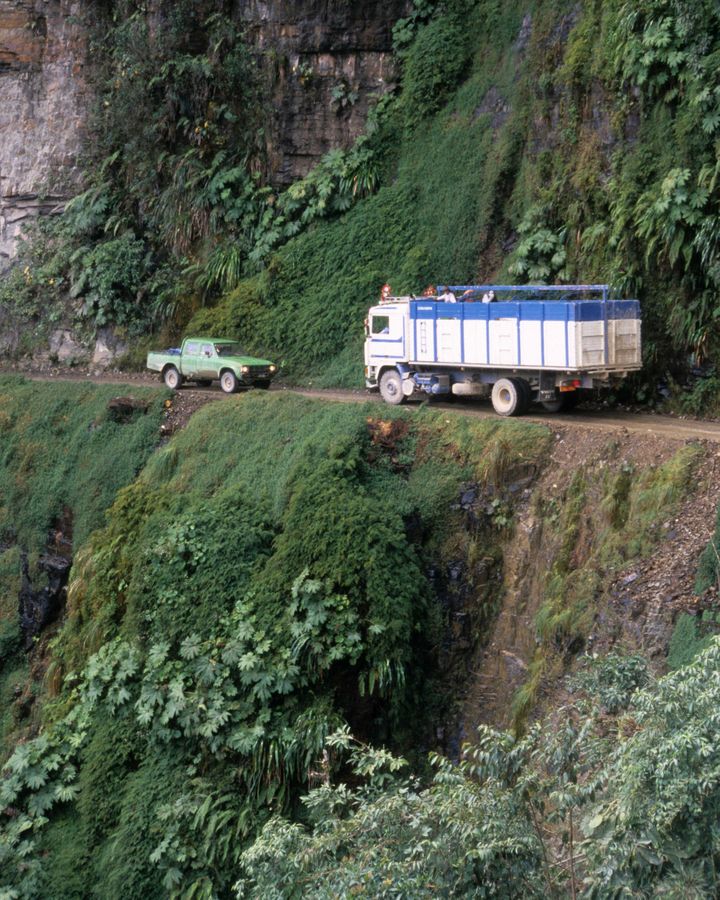 Since parts of the highway are just 3m wide, navigating oncoming traffic can be tricky (Credit: James Brunker/Alamy)

In the US state of Georgia, the success of products like Vin Mariani inspired pharmacist and former Confederate soldier John Pemberton to create Pemberton’s French Wine Coca, which originally included a mix of cocaine and alcohol, as well as caffeine-rich kola nut extract. It later developed into Coca-Cola: while cocaine and alcohol have long since been removed, cocaine-free coca-leaf extract is still used as a flavouring.

Cocaine and cocaine-based products were legal across Europe and North America in the late 19th and early 20th Centuries, championed by the likes of Sigmund Freud, who wrote several papers on the subject and experimented on himself: “[A] small dose lifted me to the heights in wonderful fashion.” But the drug fell out of favour, became associated with vice and criminality, and was eventually banned across much of the world, as was coca, though the latter remained legal in Bolivia.

As demand for cocaine soared again in the 1980s, the US-led “war on drugs” devastated Bolivia’s nearby Chapare region, which had become a major coca-producing area: anti-narcotics activities resulted in widespread human rights abuses, including killings, torture, arbitrary arrests and detentions, beatings and thefts. In response, popular protests by cocaleros – coca growers, most of whom had indigenous Quechua or Aymara heritage – aided the rise of Evo Morales, leader of the Six Federations of the Cochabamba Tropics, a trade union representing coca growers.

As sociologist and historian Silvia Rivera Cusicanqui wrote in ReVista magazine, cocalerosplayed an important role in the 1999-2000 “water war”, an uprising against the privatisation of the municipal water supply company in the city of Cochabamba, an event that also boosted Morales’ political ascent. Alongside other grassroots movements, this “eventually led to the election in 2005 of… Morales, an Aymara native, as the first indigenous president in the Americas”. Once in office, he swiftly moved away from the US-led eradication-and-prohibition approach to coca with a policy commonly referred to as “Coca yes, cocaine no”, which permitted growers to cultivate plots of coca within specified limits.

But these geopolitical machinations felt like a distant prospect as I walked through the tranquil coca fields carved into the hillside below Coroico, thick foliage lapping at their edges like an incoming tide, while birdsong filled the air. 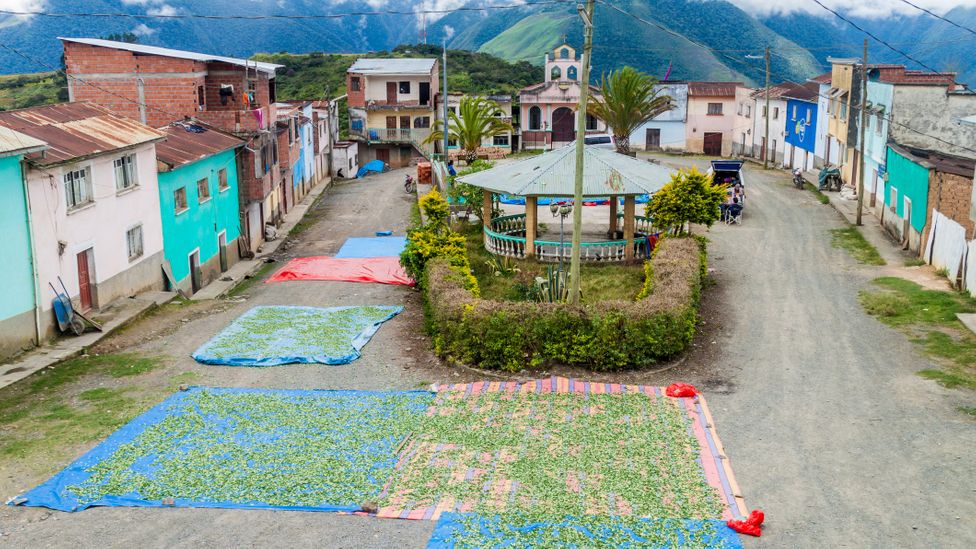 Much of Bolivia’s coca is grown in the Yungas; here, coca leaves are dried in Cruz Loma village near Coroico (Credit: Mathess/Getty Images)

Today, coca is considered a sacred plant by many Bolivians, used regularly by a third of the population (cocaine, though, is illegal). In his book Coca Yes, Cocaine No, Thomas Grisaffi wrote: “[Coca] is accepted across most sectors, regions and ethnicities… It is best thought of as a national custom, much like drinking tea is for the British.”

Eventually, I reached the churning Coroico River, symbolic of another Yungas resource: gold. A so-called “ruta del oro” (golden route) extends for 350km through the region’s waterways and into the neighbouring Amazon and has drawn prospectors for centuries. Although the river, stream and creek beds have proved rich in gold deposits, they have never produced enough to sate the appetites of the conquistadors and those who followed in their wake. As a result, countless rumours of lost fortunes and hidden treasures have swirled around the Yungas and neighbouring regions.

Many myths are linked to the Jesuits, who – through the exploitation of indigenous peoples – amassed great wealth in South America before being expelled in 1767 after growing too powerful and independent-minded for the liking of the Spanish crown. What happened to the order’s riches soon became a subject of much speculation, little of it tethered to reality.

Countless rumours of lost fortunes and hidden treasures have swirled around the Yungas and neighbouring regions.

Percy Harrison Fawcett, an eccentric British explorer who spent years travelling through South America in the early 20th Century, provides a flavour of this gold fever. In his book Exploration Fawcett, he described a story about a “big treasure” buried by the Jesuits in a tunnel near the Sacambaya River, which winds through the southern Yungas. “On learning of their impending expulsion… the [Jesuit] gold was gathered at Sacambaya… and it took six months to close up the tunnel,’ Fawcett wrote. The six indigenous Bolivians who dug the tunnel and seven of the eight priests who knew of its whereabouts were subsequently killed to protect the secret, he added. (Fawcett himself ultimately disappeared while searching for the supposed lost Amazonian city of ‘Z’.) Despite a distinct lack of evidence, this form of tantalising myth has proved remarkably resilient. 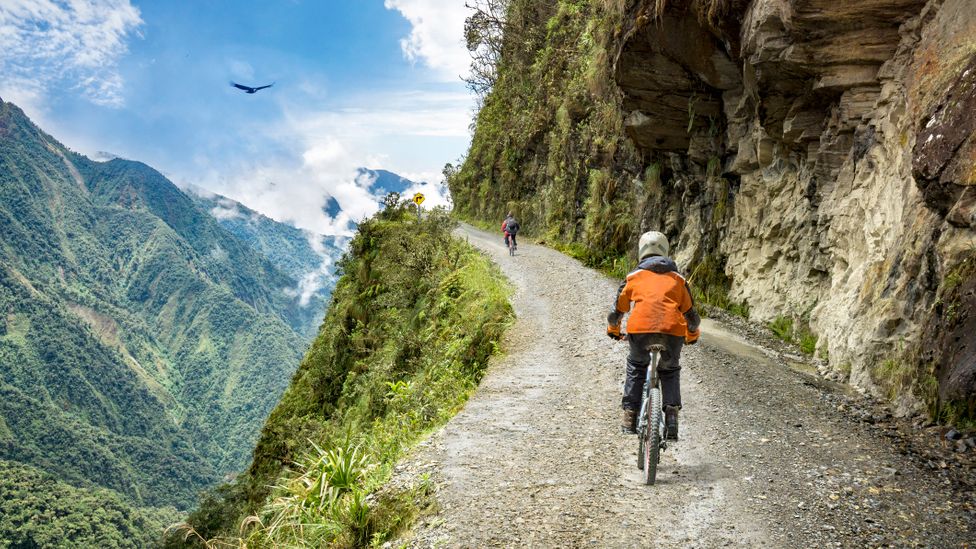 Cycling the 64km Death Road has become something of a macabre tourist attraction in recent years (Credit: Filrom/Getty Images)

Beyond the tall tales, something of a gold rush is underway in parts of the Yungas and the Bolivian Amazon, sparked by the rise in gold prices after the 2007-2008 global financial crisis. Much of the mining is illegal and linked to organised crime, poisoned waterways and increased deforestation, as highlighted in a 2018 report by the Amazon Socio-Environmental Geo-Referenced Information Project, a coalition of civil society organisations.

But there was little sign of this back in Coroico. As I sipped a mug of coca tea, waiting for my trufito fill up with passengers for the return journey up the Death Road, the only flash of gold was cast by the setting sun over the knotted Andean foothills, which slowly unravelled as they tumbled down the valley.

Shafik Meghji is the author of Crossed off the Map: Travels in Bolivia

The Open Road is a celebration of the world’s most remarkable highways and byways, and a reminder that some of the greatest travel adventures happen via wheels.