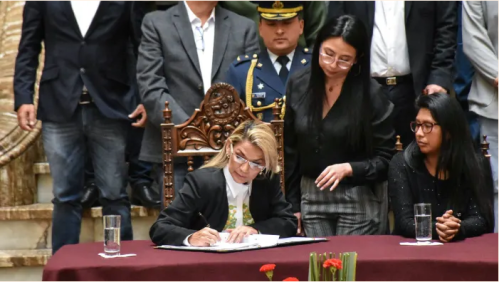 Hopes were rising of an end to weeks of violent protest in Bolivia after supporters of former president Evo Morales reached an agreement with the interim government that replaced him to hold fresh elections early next year.
President Jeanine Añez signed into law on Sunday a bill annulling the results of last month’s elections, which the Organization of American States said were marred by fraud, and calling for a new vote within 120 days. “We are returning to normal after something so hard and so dramatic, but I think we are moving forward,” Ms Añez told reporters on Monday.
Mr Morales and Álvaro García Linera, his former vice-president, will not be allowed to stand in next year’s rerun because they have already exceeded a constitutional limit allowing two terms of office.
Mr Morales fled to asylum in Mexico two weeks ago amid a popular uprising over his attempts to claim victory in the election and a fourth presidential term. From exile, he had been urging supporters of his MAS party to rise up and fight what he termed a “civil coup” in Bolivia and let him return to power. The resulting bloodshed cost more than 30 lives and brought the country close to civil war.
Eduardo Gamarra, a Bolivia expert and professor of political science at Florida International University, described the weekend agreement between the government and the opposition as “an enormous achievement considering how close to the brink they got”. 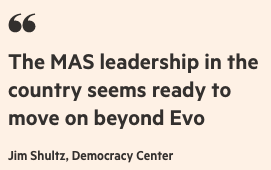 “It reflects the tensions within Evo’s party, which split into two very important camps,” the professor added, “one which didn’t want to mortgage their future to the former president’s fate . . . and the other more radical wing very closely tied to Morales. For the moment, the pragmatists have won.”
Under the terms of the weekend agreement, negotiated with the help of international mediators, new officials will be chosen within 20 days to head a reformed electoral authority. That body will then have the responsibility for setting a date for a fresh vote and making the necessary arrangements.
The government has also ordered the army to pull back from the central city of Cochabamba, which was the scene of some of the worst violence, and officials said that the blockade of roads around the de facto capital La Paz by MAS supporters had been lifted.
Numerous challenges remain. Weeks of violent protests by supporters and opponents of Mr Morales have polarised the country and attempts by the MAS to stop food and fuel from reaching La Paz caused widespread anger, as did the deadly clashes with the security forces. Ms Añez has also been criticised for exceeding the authority of a caretaker government by announcing big changes to Bolivia’s formerly pro-Cuban and pro-Venezuelan foreign policy.
Jim Shultz, a Bolivia expert and executive director of the Democracy Center, a non-government organisation, said that Ms Añez’s “unelected interim government needs to start acting like one”. That meant leaving any judicial action against Mr Morales to a future elected government, avoiding big policy changes and perhaps bringing some MAS figures into the caretaker administration, he said.
It is unclear at this point who might stand in next year’s rerun election. Former president Carlos Mesa was the main challenger to Mr Morales in last month’s vote but since then new figures have emerged who may wish to throw their hats into the ring. On the MAS side, Mr Morales’ lack of any clear successor will complicate efforts to choose a fresh candidate.
“The MAS leadership in the country seems ready to move on beyond Evo,” noted Mr Shultz. “His demand from Mexico to [be allowed to] return backfired.”
https://www.ft.com/content/6e9d2272-0fa5-11ea-a225-db2f231cfeae