The developments were the most serious threat yet to President Evo Morales’s attempts to hold on to power after last month’s disputed elections.

“A coup is underway,” Mr. Morales declared in a televised address on Saturday from his traditional stronghold in the city of El Alto, outside La Paz. Looking tired and deflated, he called on supporters to take to the streets while asking political rivals to sit down for talks to resolve the crisis. [Bolivian Thoughts opinion: While evo was preaching dialogue and democratic values, his hordes were assaulting with dynamite, rocks and clubs a bus caravan with university students, going to La Paz, coming from Sucre and Potosi. Hideous attack, resulting in many injured people, you can watch videos using this link. The caravan was cowardly ambushed, mob paid by the Governor of Oruro, who also gave them tear gas bombs to attack the caravan. Female young woman were stripped from their clothing, and beaten along with their male companions (around 14 in total) … that is the real face of this autocrat, of this egomaniac.]

The dramatic escalation of tensions over the weekend raised the question whether the security forces more broadly were abandoning the president, something that would make it virtually impossible for him to remain in power.

In a blow to Mr. Morales’s chances of regaining control, the country’s armed forces responded to the president’s speech by issuing a statement professing neutrality and promising to “not clash with the people.” [Bolivian Thoughts opinion: This is very dangerous, as there is no doubt, that people fighting for democracy will clash with evo’s violent hordes, and only when there are too many injured, and even fatalities, without the deterring presence of the police or the army. Only then, the army will be asked to step in by evo, and after “appeasing” attempts, where people from both sides will result murdered, will be the perfect excuse for evo to call for a “state of siege,” his perfect excuse to remain in power. Unmolested and with the help of corrupt OAS, who are conducting an questionable electoral audit, will claim he won, that he prevailed and will stay in power; like Chavez, Noriega and Maduro did before, with the help of dubious Almagro, as head of the OAS.]

The commander of Bolivia’s armed forces, Gen. Williams Kaliman, said Saturday afternoon that the military would not crack down on protesters. But the statement suggested that top military leaders were hedging their bets as the crisis escalated: It did not clearly signal support for either Mr. Morales or those seeking to oust him.

“The country’s current problems generated in the political arena must be resolved bearing in mind the nation’s highest interests before we reach an irreversible moment,” General Kaliman said.

Military leaders are no doubt mindful of the last time the armed forces were deployed to restore order during a period of social unrest in 2003. After those confrontations turned deadly, some military personnel were accused of committing human rights abuses and prosecuted.

By Saturday evening, Mr. Morales lost a key propaganda tool, the state-run Television Boliviana, after protesters forced its employees to abandon the broadcaster. The station then switched from pro-government news bulletins to old documentaries. [Bolivian Thoughts opinion: By nightfall, evo’s hordes, as a retaliation, went after private tv channels and damaged their broadcasting antennas, who are located at the edge of El Alto city, so they can reach La Paz city.]

Bolivia erupted in violent protests after Mr. Morales claimed to have won an unprecedented fourth term last month despite concerns from electoral observers over the validity of the results. The head of a vote auditing company contracted by the Bolivian government said Friday that ballot counting had revealed irregularities that prevented him from certifying the results. 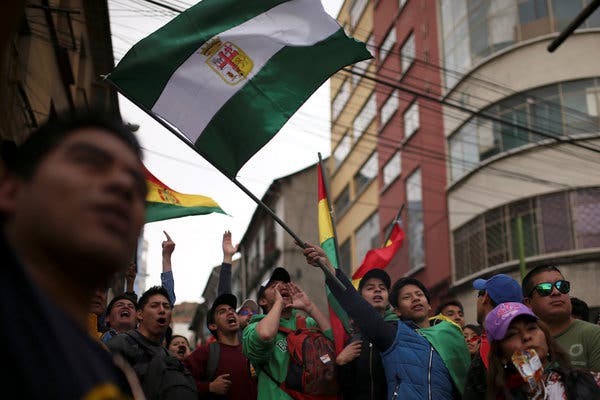 Police units defected in La Paz and in at least five other major cities. State television broadcast images of throngs of police, many still in uniform, marching with protesters in La Paz and in the country’s business capital Santa Cruz. In La Paz, crowds of protesters cheered the rebelling officers.

Rebel police officers claimed to have taken over at least one regional governor’s office by Saturday, and one ruling party mayor joined the opposition. In the city of Oruro, defecting policemen dispersed government supporters with tear gas, according to local media.

As unrest spread across the nation, one of Mr. Morales’s key political allies, Juan Carlos Cejas, the governor of the Potosí region, resigned because, he said, he feared for his life.

Mr. Morales in his address cast himself as a victim of a conspiracy by people who “don’t respect democracy, and don’t respect the results of the last elections.” He called on the police to “uphold their duty to safeguard the safety of the Bolivian people.”

It was his strongest direct acknowledgment of the spreading rebellion.

He said the talks he was proposing should involve members of four parties that won legislative seats in the latest election, a criteria that would exclude some of the main leaders who have been mobilizing against him in recent days.

“We hope tonight to find peaceful solutions through dialogue,” the president said. “We’ll have an open agenda with the goal of pacifying Bolivia.”

Mr. Morales also called on supporters to come out to defend his government, raising fears that clashes could intensify. On Saturday, eight anti-government protesters were injured when their convoy was ambushed by government allies on the way to a demonstration in La Paz, opposition leaders said.

Isabel Mercado, the director of Página Siete, one of the country’s main newspapers, said Saturday that Mr. Morales’s hold on power appeared to be slipping as the police mutiny grew and the leaders of the armed forces remained out of sight.

“Without the police and the armed forces, I think it’s very hard for him to hold on,” she said.

Local news media reported that police defections had spread to at least four cities outside La Paz. The police have demanded better working conditions, the resignation of their commander and guarantees they won’t be used for political ends, The Associated Press reported.

Police guards outside the presidential palace in La Paz left their posts on Saturday, the A.P. reported, allowing anti-government protesters to walk up to the doors of the building. Mr. Morales was not in the compound when police retreated to their barracks.

Officials in the palace in La Paz were evacuated, leaving only a military presidential guard. Protesters moved peacefully to the doors of the compound, and later left the area.

Some police guards have abandoned their posts at several ministerial buildings and officers took over the old presidential palace, hanging national flags from its walls.

Bolivia’s postelection unrest has so far claimed the lives of three people. Protesters have clashed with security forces across the country and burned public buildings.

A pro-government mayor in a small city in central Bolivia was kidnapped and marched through the streets barefoot and drenched with red paint in the past week. [Bolivian Thoughts opinion: Such “kidnapping” proved to be fake, that Mayor, when walking surrounded by alleged rioters, showed it was an staged fraud, many photos and videos paid at the end, people around her were identified, one as her everyday’s body guard and whoever cut her hair, turned out to be a police woman undercover … before the police turned against evo.]

Carlos Mesa, the former president who came second in the Oct. 20 election, said Mr. Morales is to blame for the unrest that has rattled the country in recent weeks.

“The government is condemning itself to a disastrous exit,” Mr. Mesa told reporters on Saturday. “That’s what they deserve for not listening to the people.”

The opposition claims the vote on October 20 was rigged. When initial vote tallies showed Mr. Morales had to face an uncertain second round of elections, the ballot count suddenly stopped.

Election officials didn’t provide updates for nearly 24 hours without giving an explanation. When the results were finally updated, the initial trends were reversed, giving Mr. Morales just enough of a lead to avoid a runoff and spurring the opposition to take to the streets.

“We want President Evo Morales to go,” the leader of Bolivia’s civic opposition, Luis Fernando Camacho, told reporters in La Paz on Friday. “We need him to go because we have decided so, because he has laughed at all of us.”

Ernesto Londoño is the Brazil bureau chief, based in Rio de Janeiro. He was previously an editorial writer and, before joining The Times in 2014, reported for The Washington Post. @londonoe • Facebook

A version of this article appears in print on Nov. 10, 2019, Section A, Page 8 of the New York edition with the headline: Bolivian Leader Clinging To Power as Police Rebel.