Have you visited the Mission Church of San Xavier, Bolivia?

This gorgeous, colorful 18th-century church is part of one of Bolivia’s few surviving Jesuit missions.

Enter this 18th-century church, and you’ll find yourself immersed in a world of bright colors, intricate patterns, and superb architectural details. It’s a feast for the eyes, made possible by a troubling concoction of Old World colonialism and New World traditions.

The church is part of the mission of San Xavier (sometimes also spelled San Javier). The mission was first established in 1691, but moved around a bit before finding its permanent spot in the 18th century. A Swiss Jesuit architect completed the church that still stands today in 1752.

Original plan for the Missions

Missionssprouted up across Bolivia during the 17th and 18th centuries. Each one typically featured a church, workshop, and school, all centered around a courtyard. Jesuits sent by the Spanish Crown to explore the South American frontiers created them to convert the indigenous people to Christianity. 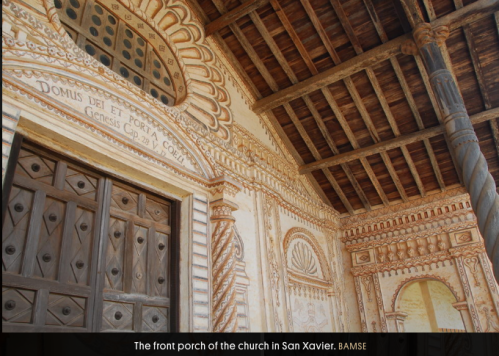 Despite their colonial pasts, which sadly involved removing native people from their homes and forcing them to convert, the missions stand as beautiful examples of New World religious architecture. Their layouts were inspired by concepts of what 16th-century European philosophers believed formed a perfect city. Most of the wood and adobe structures are capped with slanted roofs and boasted vivid colors and designs. The mission churches in particular are gorgeous hybrids of typical Catholic architecture and local indigenous traditions.

Unlike other missions in South America, the Jesuit Missions of Chiquitos managed to survive after the Jesuits were expelled from Spanish territories in 1767. Six still stand today: San Xavier, San Rafael de Velasco, San José de Chiquitos, Concepción, San Miguel de Velasco and Santa Ana de Velasco. They’re listed as UNESCO World Heritage Sites. The mission of San Xavier was one of the first to receive such recognition.

Know Before You Go

The address leads to the mission of San Xavier, one of the six surviving missions.