So much for the “governmental friendship” between Argentina and Bolivia…

As much as it cost to open up markets for alternative development products, Chapare bananas continue to struggle in the international markets. This time, Argentina with higher taxes that makes our exports non-viable… this action is another demonstration of how ‘good’ are current government’s international alliances… current president’s of both countries like to talk about brethren and long-lasting relations… however, reality is different. Both sides only look at their potential votes from the Bolivians who happen to live in Argentina… 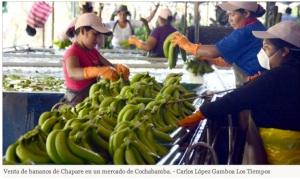 The Argentine Government rose by 47.5 percent, the tax to the Argentine importers of Bolivian banana and the national exporters fear the impact that this will cause in the price of the fruit at their origin, reported yesterday by producer Roger Mérida.

The tariff increase occurs one month after a bilateral meeting in Buenos Aires in which the Argentine Government ratified the Regional Agreement on opening of markets (ARAM 1). [so, is this a surprise or not? if not, Bolivian government should have done something about it, inform, continue negotiating, etc.]

Mérida, Manager of the company from Befrut, explained that the Argentine importers of Bolivian banana paid 20 percent tariff on the amount invoiced by the exporter, but more than three weeks ago that tariff rose to 29.5 per cent, which is equivalent to almost 50 percent increase.

“The tariff paid by the importer until the banana reaches the Argentine side, which finally (causes that) expenditure that occurs is placed to the banana box price”, explained to justify fears of Bolivian before the new measure exporters, since Argentina is the main market for banana plantations in the Cochabamba tropics.

In mid-August, Cochabamba banana exporters declared emergency for the loss of approximately 1 million Bolivians weekly due to the policy of restricting imports that governs Argentina since last year. [so, instead of playing soccer and going from place to place, current leader of the coca growers of the Chapare, should have done something about this!]

That country absorb 95 percent of the production of this fruit, then said the Manager of the banana company Integral technical agriculture (Ebita) and former President of the banana exporters Chamber of Bolivia, Igor Guzmán.

Since February 1, this year, the Argentine customs implemented the system of declarations sworn advance import (DJAI) and the restrictions were increasing, culminating with the ban on banana income since last July 27. As a result of this fact, the Government’s intervention was requested, and in late August, a bilateral meeting headed by the Deputy Minister for Foreign Affairs of Bolivia, Juan Carlos Alurralde, and Secretary of Foreign Affairs and worship of Argentina, Eduardo Antonio Zuain was carried out. According to a statement from the Foreign Ministry, was reviewed bilateral relations in areas such as border integration and economic and commercial issues, among others. [results?]

The release notes that “were reached important agreements to facilitate the strategic products of the regional economy in the country access to the Argentine market”. [we can see that clearly…]

In this regard, Mérida said that exporters awaiting an official report and if they do not have it, would travel to La Paz for more information. [centralization at its best!]

The restriction of imports that applies the Argentine Government since the first months of 2011 is a policy which seeks a trade surplus of more than 10 billion dollars for the Argentine economy, in 2012.

I have witnessed how hard and long was to train the farmers of the Chapare in banana management, quality control and frustration, not only against tariffs and red tape from countries like Argentina, but overall blockades that prevented their produce to reach its markets. I just hope our banana industry prevails.