El Deber had the great idea to publish Fides News Agency report on one of our heroes: 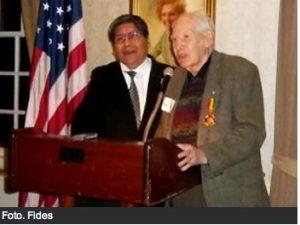 The Bolivian Hugo Pinedo, aged 95; he fought in the Chaco War (1932-1935) in defense of the natural resources of Bolivia, and six years later joined the United States armed forces to fight in World War II against the Japanese and the Germans. Pinedo was recognized in Washington D.C. by the Coalition for Democracy and prominent Bolivian on residents, at the political headquarters of the Republican congressmen, in Capitol Hill.

“It was a great honor to fight for my country and also for my second home that is the United States of America in World War II,” said Pinedo, who is firm with the help of a cane and shows a serene look and attentive smile.

The veteran of the Chaco War and retired military from the air force of the United States of America, apologized for not talking about policy and the administration of President Evo Morales and the armed forces of Bolivia in the process of change: “I’ve never gotten in policy, I am military and I was in the Chaco defending natural resources and in the war against Nazism” “I am a military retiree of the American aviation and respectful of my country Bolivia”.

“I came to the United States the year 1934, after having fought in the Boquerón battle, but the battles which were well made were those of Fortín Saavedra and kilometer 7;” There the Bolivian soldier demonstrated value and military strategy in the Chaco War… I came to the United States because in Bolivia I was going to have my leg cut off, my family sent me to this country where I recovered and I joined in 1936 the United States aviation, I was always in the military and after 20 years I retired,” said Pinedo in interview with the news agency Fides (ANF) after public recognition in the Tuesday night event.

“I go to Bolivia every two years.” We have fought with courage for the country and I hope that the Bolivian Government always recognize that value. Here in the United States to me I am well recognized, I have two pension, the first is about $ 38,000 a year and have another $ 34,000 year pension; with that I can live decently, hope that the Veterans of the Chaco War still living will receive the same and the Bolivian Government’s respect because they deserve,” said excited by the applause and gestures of affection received when he left the Hall of the Capitol events.

In Bolivia the veterans of the Chaco War receive less than $ 300 as a monthly lifetime income, which annually reaches a little over us $ 3,200. While 6,000 widows receive slightly more than Bs 1,700 monthly. [exchange rate is roughly Bolivianos 6.97 to the dollar]

The Bolivian Jorge Lozano, Chairman of the American Business Council, highlighted the trajectory of the twice former combatant, while Manuel Rosales, director of the Latino Coalition, and Teddy Gamboa, President of the Coalition for Democracy, spoke of the exemplary life of Pinedo.

The Coalition for democracy organized an event of distinction with the presence of Bolivian lawmakers Marcelo Antezana, Senator of national convergence, Mauricio Muñoz Deputy opposition, Manfred Reyes Villa, former prefect of Cochabamba and former candidate for the Presidency of Bolivia. The event was also attended by Ambassadors Cresencio Arcos, Senior Advisor to the IABC; Bosco Matamoros, Senior Advisor to the IABC, Congressional Republicans and Bolivian entrepreneurs, as Vice President of the newly formed Bolivian American Chamber of Commerce, Grover Mendoza.

Between 1852 and 1920, began diplomatic claims for control of the area from Bolivia and Paraguay, establishing forts in place by both countries. In 1928, the forefront of Bolivian Forts, was taken by the Paraguayans, who killed six guards and set fire to the Fort, this resulted in Bolivian response by occupying the Paraguayan Fort called Boquerón. The problem was solved by the League of Nations which forced Bolivia to evict the Paraguayan Fort, and the latter, rebuilding fortín Vanguardia, naming Paraguay as “aggressor country”.

Bolivia had a strength of 250,000 men, while the Paraguayans gathered 150,000. President Daniel Salamanca had assumed in 1931 with great strength and desire to enlarge their homeland, especially militarily. The economy was thriving, with great mineral wealth and with a population of 3,000,000 people. The Paraguay was much poorer, farming economy and less (1,000,000 inhabitants) village. In Paraguay, the President Eusebio Ayala, assumed on August 15, 1932, and its position was well ahead of the armed conflict.

The German military, general Hans Kundt, veteran of the first world war, was who organized the Bolivian army, and took charge of the same, after the defeat suffered in Boquerón. In addition to the German support, told with the accession of Chileans and Czechs. For the Paraguayans was elected José Félix Estigarribia, trained militarily in Chile. On May 10, 1933 Paraguay declared war on Bolivia.

The League of Nations had imposed an arms embargo on both countries, and insisted with a peace proposal, in the month of November, 1934, although it was accepted by Bolivia, was rejected by Paraguay. The embargo was therefore only raised to Bolivia. The year 1935 found both sides exhausted. The Bolivians had retreated to Villa Montes. In April, the Paraguayans crossed Rio Parapiti, but were repelled by Bolivians.

The end of the war occurred on June 12, 1935, day in which an armistice was signed, in the presence of mediators. The cessation of hostilities occurred on the day 14. Paraguay, then, in 1936, in the Buenos Aires Conference, achieved recognition of almost the entire area in their favor. In 1938, Paraguay won 120,000 square kilometres while Bolivians benefited to have access to the Paraguay River, and the town of Puerto Casado, belonging to Paraguay. The consequences were the loss of 60,000 Bolivian soldiers and 30,000 of Paraguayan origin. It took much for both countries to recover from its social and economic costs.
http://www.eldeber.com.bo/nota.php?id=120301115721
The Chaco War against Paraguay was bad in every sense, like the one with Chile, foreign interests made us fight. In the Chile case, it was the dung and sodium nitrate (saltpeter) ‘guano y salitre’ with British interests; and later on the humongous copper mine site found in what used to be Bolivian territory in the Atacama desert.
In the Chaco War, the “booty” was oil and natural gas with British/American interests and a dubious Argentine participation.
Bolivia lost over half of its territory since 1825 to date, during the Chaco War, Paraguay doubled its size after the war, but failed to reach the oil wells.
Both my grandparents fought in the Chaco War, lots of mixed feelings at the time I witnessed the ‘healing’ between both countries. I visited a private park in the border with Paraguay and Tarija, Bolivia, where i saw the leftovers of a battle, including a bottom from a uniform… it had the US coat of arms… most probably a uniform wore by either of the armies or of an unknown ‘military attaché’ for which side? I will never know. The most striking thing was the remains of an unknown soldier, that could be seen in the middle of the tree that grew around the corpse… I salute  and praise Mr. Hugo Pinedo, he fought for his country and is from now on one of the best examples in our Bolivian Hall of Fame. A nice Bolivian novel about the war is “Laguna H3”.