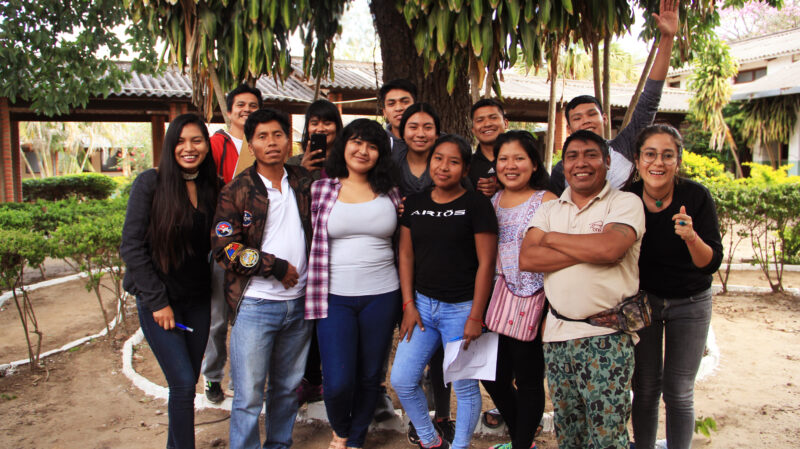 The group of workshop participants in Charagua. Photo by Jessica Peñaloza for Rising Voices.

When the Bolivian media covers climate change in the Gran Chaco region, it seems that everything is presented as natural catastrophe. However, young Indigenous peoples in the region want the media to also focus on their tourist areas and forest conservation campaigns, as well as on prior consultation with Indigenous peoples regarding economic projects. When local narratives are not captured, there is a biased view of how the realities of climate change are experienced.

The Gran Chaco is the second largest forest in South America after the Amazon, and covers four countries: Argentina (55 percent), Bolivia (25 percent), Paraguay (20 percent) and Brazil (5 percent). It is impacted by drought, extraction, deforestation, and inequality, which also have negative environmental and economic consequences for the region and the entire world.

Creating narratives that are more representative of the realities lived by the communities of the region and having greater insight into the media narratives about climate change in the Gran Chaco of Bolivia were the main premises of the media literacy course “Roipea Taperai” (“Opening Paths”) aimed at young people from the School of Indigenous Journalism (EPI) in the Charagua Iyambae autonomy.

During two days at the beginning of July 2022, the participants critically analyzed information from the media about the environmental news that affects their territory. They proposed new approaches based on their reality in order to communicate about climate change from a more local perspective and thus be able to mitigate its effects. The participants at the “Roipea Taperai” course were young people from the areas of Parapitiguasu, Charagua Norte, Alto Isoso, Alto Parapeti-Kaaguasu, Gran Kaipependi Karovaicho, and Charagua Pueblo.

Although the EPI works in the Charagua-Iyambae autonomy, young people from Chiquitanía and the Afro-Bolivian community also took part in the course. They established allies and communication networks between the communities of the different areas of the department of Santa Cruz and Indigenous peoples of the interior. The young people of these territories manage and create their content on the Ñande Ñee radio station, which is broadcast on Facebook on Saturdays, and they actively participate in their communities as leaders in their areas. They decide on the platforms and the development of bilingual content, adjusting to the needs of their territory.

The EPI is a project for the communities to take the lead in communication and for the young Indigenous journalists from the Guarani and Chiquitano communities to reinforce their sense of identity, ensuring that they keep focusing on the environment, and on how pollution and degradation affect communities and their territories.

More than 20 Indigenous peoples live in the Gran Chaco, along with other populations such as Mestizo farmers and Mennonites. The Guarani have a political autonomy that allows them to have “self-determination, self-government, administration of their economic resources, free election of their authorities in the Guarani Indigenous government according to norms and procedures of Indigenous and urban areas (…)”. 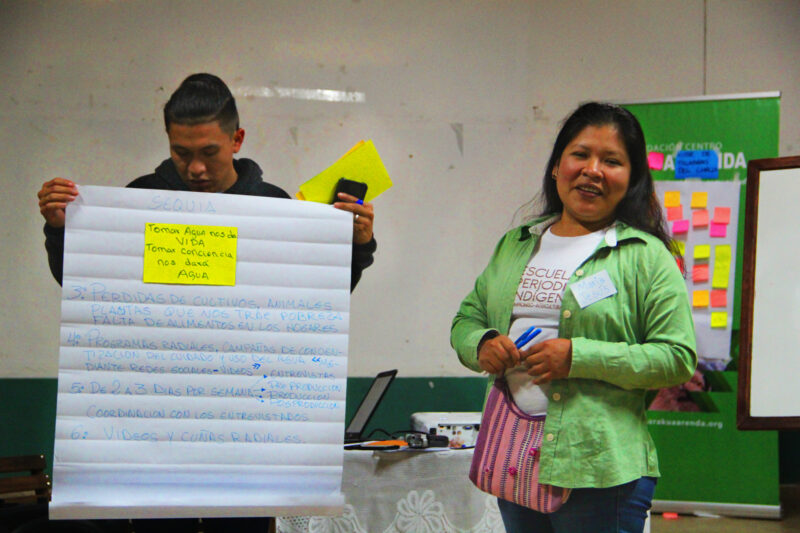 The perspective of the media versus the needs of the territory

By building a word cloud, the course participants analyzed the terms used by media when talking about climate change in the Chaco. Then they proposed other words that should be included and emphasized in communication.

This is the word cloud with the most used terms in local and national media:

On the other hand, these are the terms young people in the Bolivian Gran Chaco consider that should be included when addressing climate change:

This exercise revealed the pattern in media coverage of this region which is focusing on natural catastrophes. 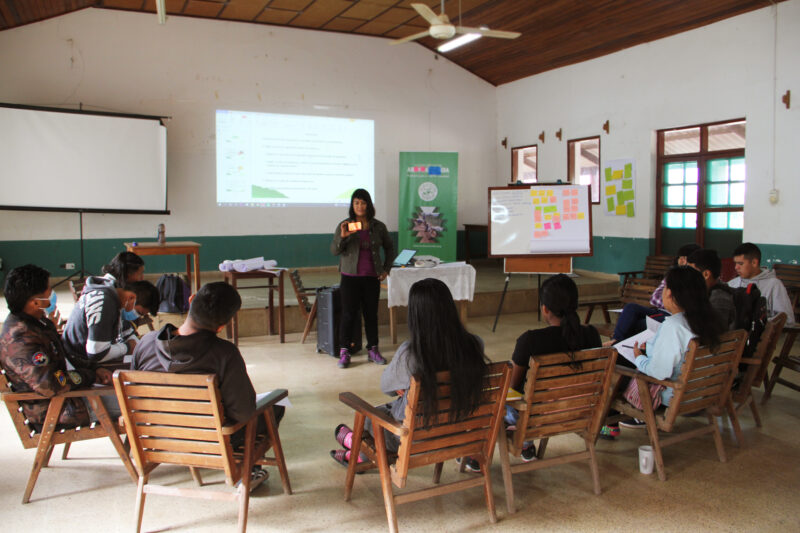 Daniel Zeballos, a young Indigenous Chiquitano from Roboré, pointed out that people in his area live off tourism, and that as a result of the news that focus on forest fires, this activity is being lost:

Talking only about this topic alienates tourists, so everyone, including those in the affected areas, generate less income.

Zeballos proposes that media also mention the word “tourism” more to support his area in Roboré.

The participants also discussed that when media repeatedly disseminate the terms “drought” and “famine,” the aid gets focused on food and medicine collection campaigns. This makes communities depend on this aid and neglects the main needs of each community, such as opening roads and supplying water to reactivate agricultural production.

The young people proposed that media should include catastrophe prevention campaigns and greater support to improve production conditions in the region. Benjamin and Genesis, two young communicators from Charagua, comment:

More research should be done on disasters from the perspective of those affected, to investigate their consequences (for example, diseases, new pests, etc.) and how they can be combated.

Another important aspect for the participants was the continuity of the projects to support agricultural production and the opening of roads, since these are not completed due to the change in management and authorities.

The lack of a disaster prevention plan, the lack of appropriate prior consultation with those in affected areas, and the lack of communicating territorial regulations and rights are aspects that young people consider should be strengthened, taking into account the fact that in recent years both outsiders to the community and the community members sell wood without authorization.

As Genesis Shuliane Quipe, a community member of this area, points out:

When talking about deforestation, it is necessary to investigate the agreements that companies make with the communities, the permits that are given and how they affect the communities. The media should cover these deals that create destitution and have consequences for the environment.

As solutions to these issues, the participants identified the power of the Indigenous Autonomy to set up its own regulations for the agricultural companies and Mennonites, while relying on media and on the importance of international opinion to create narratives that generate support for Indigenous rights.

During the workshop, the participants discussed the widely spread media articles that did not mention their sources or were biased towards economic interests outside the communities. 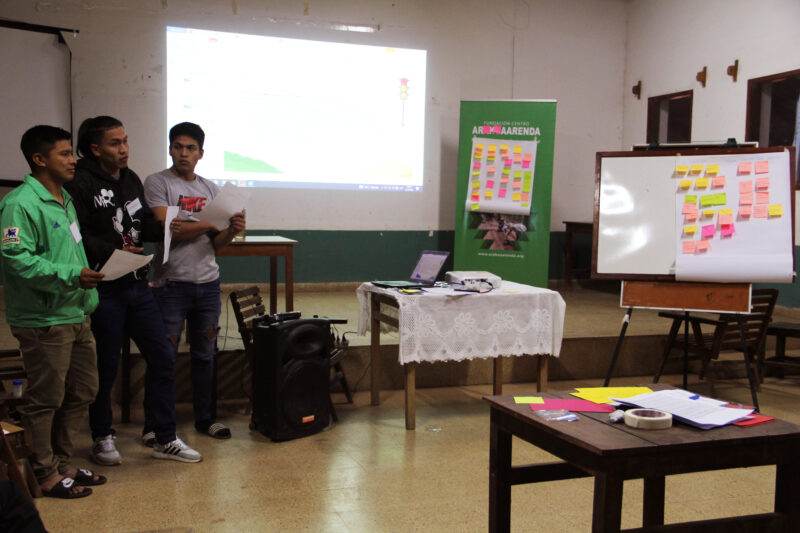 Creating narratives from a local perspective

The following actions were highlighted:

Xiomara Zambrana contributed to this article. This Rising Voices project is supported by the AVINA Foundation within the Voices for Climate Action initiative.