By Celene Fitzgerald, The Centralia Chronicle reports for TDN, photos from The Daily Chronicle:

Pastor Tracy Durham of the Vader Assembly of God Church got uncomfortably close to the political unrest in Bolivia earlier this fall, experiencing some tense moments at street barricades but ultimately siding with the protesters in their cause against a socialist regime.

“It was chaos. Luckily we had 4-wheel drive because we were driving through city parks, over sidewalks and curbs,” he said recently.

Eight other ministers and others accompanied Durham on the mission, which was sponsored by the Northwest Ministry Network of the Assembly of God to track progress on how the church is doing in Bolivia, where it first established a presence in 1956.

Their trip overlapped with Bolivia’s Oct. 21 election day, which was a national and pedestrian holiday, meaning there were few vehicles on the roads from  8 a.m. to 6 p.m.

“They actually serve (the voters) a little bit of food, a loaf of bread and maybe a bowl of soup or something. It’s a social event — bring your kids down, your family,”  Durham said.

In Monday, Oct. 22, the pastors flew to La Paz, the capital, to visit churches and meet with national leaders to discuss how to better support the churches around Bolivia.

“Our meeting was interrupted by our van driver, who said there’s a protest coming and we need to leave now or we’re going to get caught in the middle of a protest,” Durham said

Protests and marches have been occurring in Bolivia in response to claims of electoral fraud and, subsequently, to Jeanine Anez declaring herself acting president. People have died, and Durham and his fellow pastors were caught up in the upheaval as it was getting started.

“Here comes a whole group of peaceful protesters, beating drums, waving flags, and the other way comes the police with their water cannons and riot gear,” he said. Durham said they were able to dodge the commotion and get out of La Paz.

They flew to Cochabamba which, as they were told in the airport, had become the center of protest. When they landed they made it to their hotel in taxis that took them through the alleys and side streets to avoid the crowds of protesters. The drivers warned Durham and the others that the next day was the big protest day. That prompted them to leave at 4:30 a.m. and made it to their missionary host’s home and spent their day there.

“The following day things had began to heat up. People began to set up these barricades” made from low piles of wood, debris, ropes, chucks of cement, piles of dirt built to block off city streets.  “Can you imagine that in Seattle? Every block or two, nobody could get around,”  Durham said.

They left the host home that night in order to get some dinner and noticed a blockage of semi trucks.

They drove up a one-way street to get around the sei trucks but came to several impenetrable barricades. Durham said people were banging pots and pans, waving flags and beating drums.

“About that time the convoy of semi trucks moved forward and completely blocked us in,”  Durham recalled.

Two members of Durham’s group started clearing a way through, but a group of protesters started yelling and taking photos of their license plate. Durham said it was very tense and he was he was worried it was going to get violent. They ended up making it through that barricade but came to another one soon after.

“Our hosts got out and said (in Spanish) ‘Please we have women.There’s Americans and we just want to go home. Can you please let us through?’ ” said Durham. They made it back to the host’s home, which was gated and secure.

The next morning they realized that the only way for them to make it to the airport to fly home was to walk through the streets. It was 7.5 miles.

“We didn’t know what to expect. We didn’t know if people were going to be aggressive toward us or if we wouldn’t be able to make it at all.”

The group of ministers prayed for safe passage and left at noon. Their missionary hosts accompanied the Americans to the airport. “Here’s all 13 of us gringos with our suitcases and backpacks,”  Durham said.

At the first barricade the protesters apologized to the group. “They were very kind about it. (The protests) are the only way their voice can be heard. It’s for their nation,” Durham said.

As they continued to walk through town they told protesters they supported their cause. They started saying “Viva Bolivia” and waving small Bolivian flags. They were allowed through the barricades to cheers. 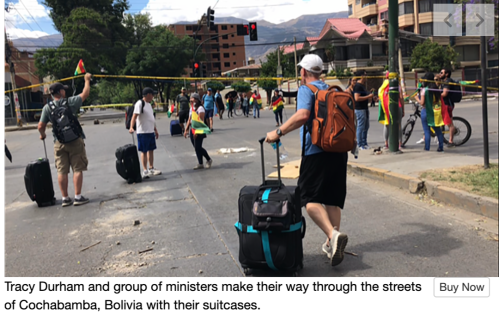 “Once they found out we were on their side they were clapping. Some people helped us with our suitcases. They were taking our picture, offering us water, cheering us on,”  Durham said.

After four and a half hours of walking, they made it to the airport at about 4 p.m. Their flight didn’t leave until 7 a.m. the next day. “The floors were covered with people trying to get out of the country. All the flights were full,”   Durham recalled.

“I learned that basically — human nature, we are the same everywhere you go. (The Bolivians) love their families, their freedom to live their life in a meaningful way and we saw that in Bolivia just as we would. (Bolivians) want their freedoms. They didn’t want four more years of socialism. They want democracy and that’s what they stood up for — some of them to the point of laying down their lives.” 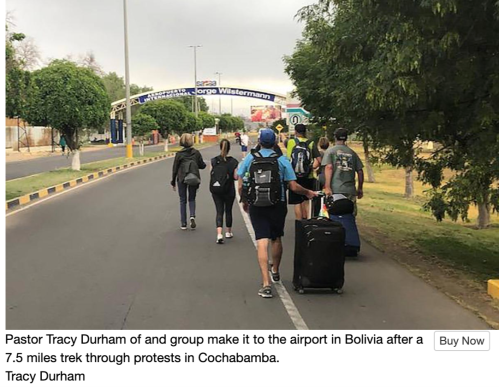