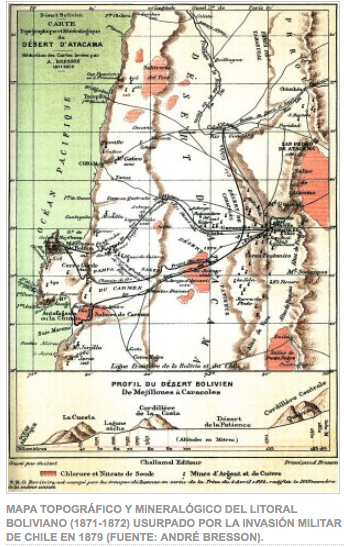 The historical record shows that the union between the Andean region of Bolivia and the Atacama coast dates back to prehistory. After the independence of Bolivia in 1825, the Litoral Province was established in 1829 and in 1867 was incorporated as Department, with an area of 120,000 km2. The Chilean Political Constitutions recognized Bolivia coastal condition.

Besides the union between the Andean region of Bolivia and the coast of Atacama dates back to prehistory, during the Spanish colonial Viceroyalty of Peru, that was established in 1542, it was subdivided into Royal Courts, one of them was the Royal Court of Charcas (now Bolivia), established by Royal Charter in 1559, included within its territorial jurisdiction to the District of Atacama and its coastline, stretching from the Loa River in the north to the Salado River in the south, beyond parallel 25th.

The situation remained unchanged when the Royal Court of Charcas passed to the dependence of the Viceroyalty of the Río de la Plata, as well as when Bolivia declared independence in 1825. The following year proceeded to the political division of the country. The former colonial intendencies became departments and the municipalities subdivided into provinces, including Atacama was belonging to the jurisdiction of Potosi.

In 1829 the Coastal Province of the Litoral was established, and in 1867 was incorporated as a Department, with an area of 120,000 km2. Bolivia had the ports of Antofagasta, Cobija, Tocopilla and Mejillones and inland populations of Calama and San Pedro de Atacama.

The condition of the coastal territory of Bolivia and its maritime sovereignty was not questioned by Chile. The Chilean constitutions of 1822, 1823, 1828 and 1833 recognized that its limit to the north was the coastal desert of Atacama.