Is there Rule of Law in Bolivia??!!

Lets take a look at the Rule of Law Index 2014 for Bolivia:

Supporting the rule of law in Latin America

Most economies in Latin America struggle with recurring problems in their institutional frameworks. The repeated flooding of the Bogota River illustrates the cyclical and expanding nature of these weaknesses and their devastating socio-economic impact.

The river overflows once every few years, inundating large portions of the semi-rural areas around the city and incurring major economic loss. Every time it happens, landowners build walls to protect their land against future damage. With each flood, new walls divert water to neighbouring areas, whose owners then build their own walls. The pattern resembles a flood-barrier arms race.

The same is true for the generalized breakdown of judicial systems throughout the region, and the never-ending war on drugs. Ours is a land of cosmetic and incomplete reforms, which carefully avoid attacking the structural problems. So, how do we escape this vicious cycle? In the long run, the solution requires a collective shift in the way we understand society and our role in it. Such profound transformation can only be achieved through education.

In our paper, Education, Complaints and Accountability, published in the Journal of Law and Economics, Alejandro Ponce, Andrei Shleifer and I argue that better-educated countries have governments that are more accountable, thanks to effective mechanisms for citizen feedback. We must start to impress upon our children that we are all stakeholders in the rule of law and that, in the end, playing by the rules is better than taking shortcuts for personal benefit at the expense of others.

Of course, action can also be taken in the short run. The first step is to assess the problem in its true proportions, which requires objective and impartial measurement. On March 5, the World Justice Project (WJP), where I serve as executive director, released the WJP Rule of Law Index 2014. The report relies on more than 100,000 households and 2,400 expert surveys to measure how the law is experienced in the everyday lives of citizens around the world. The findings show positive signs: in Latin America and the Caribbean region, protection of fundamental rights and government openness are stronger than anywhere else, except Western Europe and North America.

Grave challenges were also found: Latin American countries struggle the most with violence, corruption and ineffective justice. Crime rates are the highest in the world and the use of violence to resolve personal grievances is widespread. The region’s criminal justice systems are, on average, the least efficient in the world. Judicial delays and ineffective enforcement of civil justice are widespread. Corruption and impunity remain major challenges, particularly among legislative bodies.

In the case of Latin America, the data suggests we should go back to the basics: instead of relying on temporary solutions such as building higher fences and buying armoured vehicles (which are cumulatively more expensive, have a regressive effect on society, and ultimately do not solve the problem), all sections of society must commit to a major collective effort to help clean and revitalize the basic institutions of the state.

One example would be to mobilize resources to ensure that police officers on the street are adequately trained and remunerated, and held accountable for misconduct. In Latin America, where income inequalities are among the highest in the world, private companies and wealthy individuals should take the lead.

So, now lets take a look at BOLIVIA’s data: 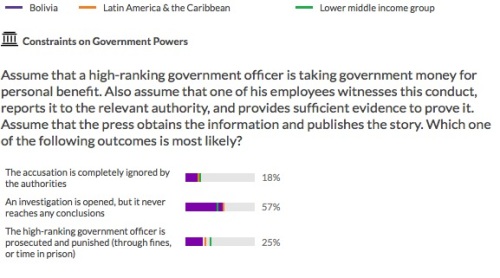 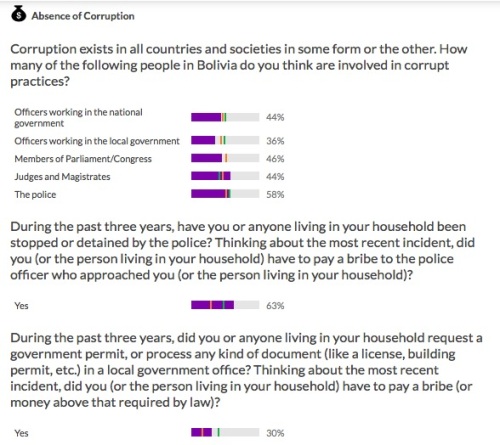 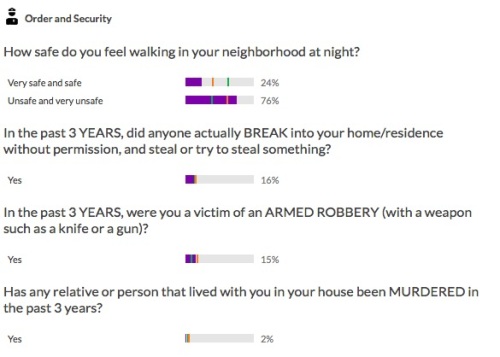 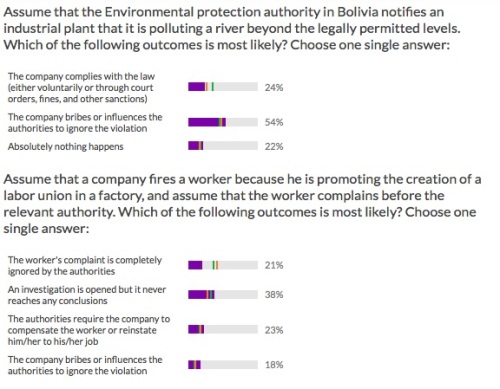 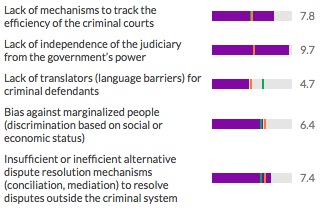 Important feedback to REBUILD our nation!