What about the 2012 Bolivian population census?

More than ten years ago Bolivia had its last census; questioned as it did not reflect real location of some of its citizens, Santa Cruz alone had over 200K people that weren’t accounted for… this coming November 21, 2012 a national census will take place. El Deber’s editorial [Nov/16/2012] should serve as a reflection and as background for this census’ results:

By what is seen a few days before the completion of the national census of population and housing, the relevant authorities have not taken forecasts that will ensure its success.

The importance that has a census for any country requires that those who organize it, take into account the results that will be obtained, and will serve for development planning in the next ten years.

But a census that has many gaps, starting with the selection and recruitment of persons that will allow good data gathering, does not guarantee that work will be done in a serious manner.

It is said that planning that will be made from the data obtained by the Census might not correspond to the reality of the country, as the shortcomings of the process may not allow to observe it.

A doctor who receives poor analysis results made to a patient, could propose a wrong therapy, even counterproductive. Why is that countries put all the effort into that censuses are well made, because they are snapshots taken at the country.

As things are going, the snapshot which is proposed with the Census could be moved, blurred. What is decided from this outcome could be a mistake.

The multinational Assembly should have had a role in the pre-census process control in order to detect failures that could occur as a result of improvisation. But the Parliament has been indifferent to this irregular process.

Failures jump by all sides. When there is only ten days for the date of the census, it was admitted that more than half of the volunteers who should be involved in the process had not been recruited and least trained as it was necessary to let it happen.

It has been alleged, in advance, that the census has not included a key question: whether or not the citizen have the habit of chewing coca, “acullicar”, which had led to define clear policies on the worst nightmare that shakes the country at this time: drug trafficking.

But there are other loose ends in this process which increase the uncertainty and the doubts.

The civic leaders of Oruro have made know that the geographical extent of the Department has not been well-defined, especially by conflict with neighbouring departments.

Vice President Alvaro Garcia Linera has said that those who make such comments should take into account a census is not used to define the geographic boundaries of the departments.

But if you don’t know precisely what is the size of a Department, by defining its limits, its perimeter, you can poorly define how many inhabitants does have the population census.

Such details should have been clarified in advance, required, instead of giving inconsistent explanations.

The importance of this process requires to do it, with all the necessary care, but it is not noted that was given sufficient attention.

The authorities in charge would have to give an explanation to the country and become liable for any damage that might occur.

A few cartoons illustrate the perception over this census: 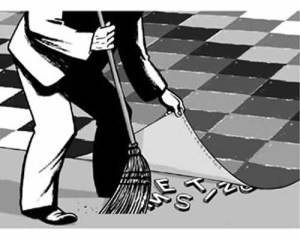 The controversial inclusion or not of the mestizo category in the census is reflected in this cartoon, as current government sweeps the mestizo under the carpet which has the colors/shape of the “new” Bolivian flag, in addition to our regular and beautiful national flag!

In the census ballot, question 29 addresses this issue with the question: As Bolivian do you feel you belong to an indigenous nation, peasant group or a Bolivian-African one? If the person responds yes, it will lead to a next question to be more precise of which indigenous group the person belongs to.

If the answer is no, then it is de facto implied that this person could be considered as mestizo. So… only you know how you feel and are identified to any of those categories. Current government has tried to promote many identities and real benefits for those population, remains to be seen, after long six years in government…

This cartoon is from La Prensa, November 16, 2012; about question 29 explained above. The person is saying “lets hope it does not happen” 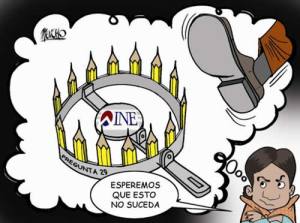 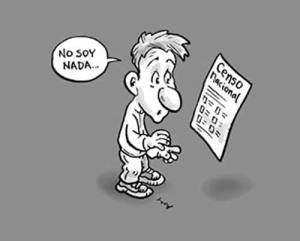 Again the issue of being “labelled” to a category that does not fulfill who you are, in essence, creed, beliefs, nature.

As the person in the cartoon watches the ballot, says: “I am nothing…” 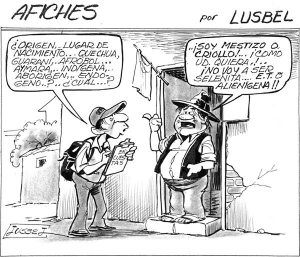 The person in charge of the census asks: “origin… place of birth… Quechua, Guarani… AfroBol… Aymara… Indigenous… Aborigine… endogenous..? .. which…?”

Most of Bolivians feel we are mestizo, mainly because we have strong western civilizations ties, culture; in addition we are mostly Christian believers [Catholics, Methodists, etc].

The reflection that El Deber’s editorial does, is worth remembering!