Kudos to Tahumanu!! This is how private ventures must operate this century! Taking care of the environment and using and reusing all available inputs. I welcome Tahuamanu to The Hall of Bolivian Fame. 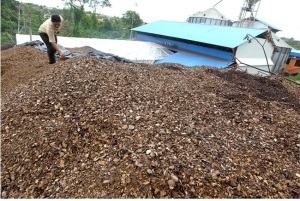 While the subsidy of diesel for the generation of electrical energy in Cobija amounts to some Bs100 million annually and demand grows, a Pando industry, ‘castañera’ [almond/chestnut, mostly known as Brazilian nut, although most of this product reaches the world from Pando, Bolivia] Tahuamanu, shows face for the region as it begins to generate their own energy (1 megawatt) and also plans to have a surplus for the population [consumption] in the short term.

Electricity is generated with chestnut shell and works from a week ago in the heart of the capital of Pando. At present, 30% of the shell is used to generate steam in a boiler and the other 70% is stored in a separate place from the plant for a variety of applications, said the general manager of the industry, Raúl Álvarez.

The Manager while he expressed concern for the drop in the price of almond [Brazil nut] in 2012 of $5 per pound to $2.5, he remains confident that in a short time, the situation will be leveled off.

Stated that Tahuamanu is a company that has markets in Europe, USA, Australia, South Africa, Canada, Russia and countries of Middle East as Israel, United Arab Emirates. The largest market is Europe (England and Holland) which means nearly 60% of their exports.

The factory exports about 2,000 tons per year that represents between $10 and $15 million dollars a year.

In this regard, the President of the National Association of the ‘castañera’ industry, René Fong, said that it is the only company in the sector that advanced in the self-generated electricity in the country.

“We are seeking leverage of the good time and consume less carbon emissions.” In Riberalta, they had planned to invest in this type of plant, but I know that it has stopped. “We can leverage the almond nuts shell to generate energy, without letting the burning of the product to reach its final stage, i.e. we can obtain the same shell charcoal that really has a good price and high demand in the international market, but we have no State policies that promote these endeavors,” he explained.

The Deputy Minister of electricity, Hortensia Jiménez, in telephone contact from Brazil stressed the entrepreneurial venture in Pando, adding she will give more details on her return.

Connection. In Cobija, there is the Central thermoelectric plant in Bahia that generates energy from diesel to Cobija and nearby towns. It is isolated.

Bolivia. At present, the supply of the SIN reaches the 1,150 MW. Electricity demand is around 950 megawatts.

Brazil. The Empresa Nacional de Electricidad (ENDE) plans to use the Brazil electricity transmission system to carry energy generated in national territory to Pando and save the consumption of at least 10.8 million gallons of diesel a year. The implementation of the proposal in the form ‘energy swap’ will stop in two years the fuel used, Bolivia imports and subsidizes the generation of energy in the North of the country.