As I was flying from Santa Cruz to Sucre, I could see how erosion is taking over. It is not just because is winter, but Bolivia losses several thousand hectares every year. 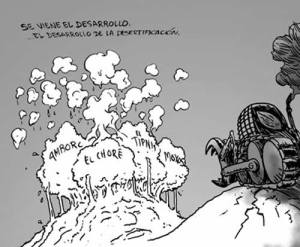 This cartoon appeared on July 15, 2011 in El Dia newspaper. You see deforesters in front of our national parks… on top it:  “development is coming… the development of desertification.”

Infrastructure projects are not only badly studied, analyzed, and implemented. They are conducted nationwide and little if anything is done in terms of remediation. Most of the environmental studies or mitigation projects end up in new pick up trucks or new offices and equipment for the people who live in the affected area. Little is done in terms of reforestation, or protecting the land from illegal settlers.

But it is also how common citizens behave. Anywhere in Bolivia you could see luxury vehicles or old-almost-junk ones, and trash being thrown out of those windows. If it is not a matter of education or money, we as society are failing poorly.

This cartoon is a sad reflection of how Bolivia continues to lose its biodiversity and no one, not even the government is doing anything meaningful to keep the environment.