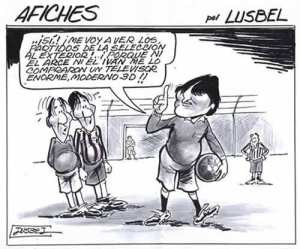 This cartoon appeared on July 8, 2011 in El Diario. It shows current president in his favorite sport. He says: “Yes! I’m going to watch our team outside!.. Because neither Arce nor Ivan (his ministers of finance and communications, respectively) has bought me a huge TV set, a modern 3D!!” And he is taking the ball with him as the others look at him in disbelief.

For one, current president is said to travel just too much outside Bolivia. In the past, other presidents travelled far less than current one. They used to ask Congress for permission to leave the country, now it happens as often as he wants. This week alone, he was off to Venezuela unexpected, unplanned. He also went to Argentina, for the second time in less than two weeks, this time for the sole purpose to attend a soccer match of the Bolivian team, newspapers reported he intended to go accompanied by at least 60 people; group flew in a Hercules plane to Salta to watch the soccer game against Costa Rica. A number of his ministers, public servants and aides went as reflected in Los Tiempos edition of July 9th, 2011. (http://www.lostiempos.com/diario/actualidad/local/20110709/el-viaje-a-jujuy-vulnera-al-menos-tres-leyes_133024_270082.html).

During harsh times, when there were many injured people and even some deaths, during riots, strikes, he invariably was away from Bolivia; for some of those trips, Carlos Valverde in his book “What happened?” has a more precise record of those unfortunate events.

Regarding soccer game, he was captioned once hitting hard on his occasional adversary in a violent unnecessary manner, displaying a portion of his character. Shockingly enough, he had that person expelled from the game. There is a video that shows how brutally he hits that player with his knee in between the legs of the other player. Then, his bodyguards and policemen take out this poor guy, a municipal opposition worker who had the misfortune to play against this president. He built a huge stadium in his home town, Orinoca, a place where ALL citizens can fit in comfortably… a place rarely used as some news programs report from time to time: there is still not progress blooming, despite the way extraordinary funding was released to this town; as opposed to other towns this size nationwide. Development does not happen, maybe because funding was allocated in non productive infrastructure. Orinoca is a small, “isolated” town in the highlands of Oruro. Not so isolated now as he also improved its access road. However, I wonder if ALL citizens were to take a sit in that stadium, who would they be watching to/at?

In any case, there is nothing better than this sport to portray how current president handles his priorities, vis-à-vis those of this nation. Bolivia is a nation that has an unfortunate history of following too often to individual leaders (caudillo). There are some surveys that indicate his acceptance and popularity are going down. On the other hand, there is also not a single opposition leader who can be accepted nationwide and with real opportunity to beat the current political party, if elections were to take place anytime soon.

The following harsh opinion is from Ethics Professor at the National University of Cordoba (Argentina), Aurelio Garcia Elorrio. Garcia’s article refers to the things that were not said to visiting Bolivian president. Special mention goes to how cocaine is affecting the lives of the citizens of Cordoba; allegedly coca paste and cocaine coming from Bolivia.

Incidentally, some of you dear readers have asked me why I never mention this president and vice president by their names… I’d just say names are irrelevant from their actions and these government officials are just transient ones, as they were all previous to them and the ones to come… or… until other politicians can take the challenge to run for office against these two. Thank GOD Bolivia is not officially under tyranny, just not yet. So, why bother?