Congratulations to all American readers, on this special day! 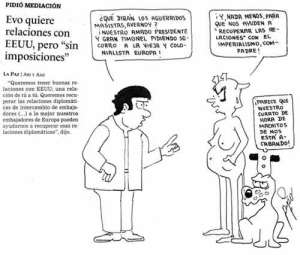 This cartoon appeared on June 30, 2011 in Los Tiempos. The clipping posts the news about the president asking for mediation; he wants relations with the USA (EEUU in Spanish) “without impositions”.

The person says “What will the fierce masistas (members of the political party in government) will say, Avernoy? (colloquial name for a person from hell in this cartoon). Our beloved President and great steersman, asking for help to the old and colonial Europe!”

The reply: “And just to ask for help to ‘recover the relationship’ with the imperialism!”

The dog ‘thinks’: It appears that our masculine (bravery) minute is running over!”

This morning, Bolivian Communications Minister offered a press conference where he stated that there is significant progress regarding a cooperation agreement with the USA, as reported by Los Tiempos in the following link: