An indigenous nation abandoned and forgotten: the Araonas fear the worst

This town, in the north of La Paz, does not have a health post and there are deaths that can be avoided. There is no connection and to be treated at a health center they must travel four days by boat to the municipality of Sena, in Pando

Abandonment is the wound that hurts the Araona indigenous nation the most. A single school that works is in precarious conditions and there are no health posts in its eight communities. Without access to basic services and the connection with the interior of the country is almost zero and very expensive if someone dares to go out. There are just over 70 Araona families who ask for attention from the State in order to escape from poverty and avoid an ethnocide in one of the 36 indigenous peoples recognized by the Political Constitution of the State.

The Araona indigenous territory is located in the north of the department of La Paz. It is part of the municipality of Ixiamas, but its scarce relationship is with the Beni region. Getting to Puerto Araona, one of the communities of this nation, means going through a hard journey. You have to first arrive in Riberalta, in Beni, and then descend the Madre de Dios River for days until you reach the indigenous town. You can also rent a plane, but this service is very expensive. 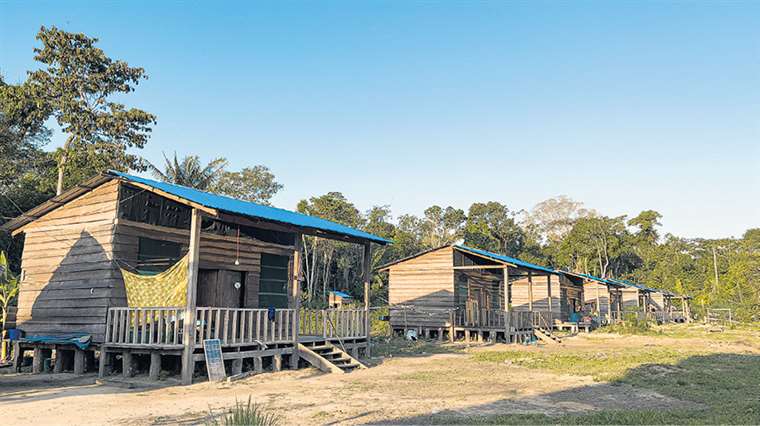 The houses were built by the same indigenous people, all with wood

Older people do what they can for their families to survive. Now they are at the culmination of the brazil-nut crop and hard months are coming to live. The araonas are dedicated to hunting, fishing and agricultural production for their own consumption. It is very difficult –almost impossible- for them to get their products to Riberalta. It has a lot of cost. They have a small agreement with the Bolivian Food Company (EBA) that buys 10,000 boxes of the more than 30,000 that this indigenous nation produces each year. 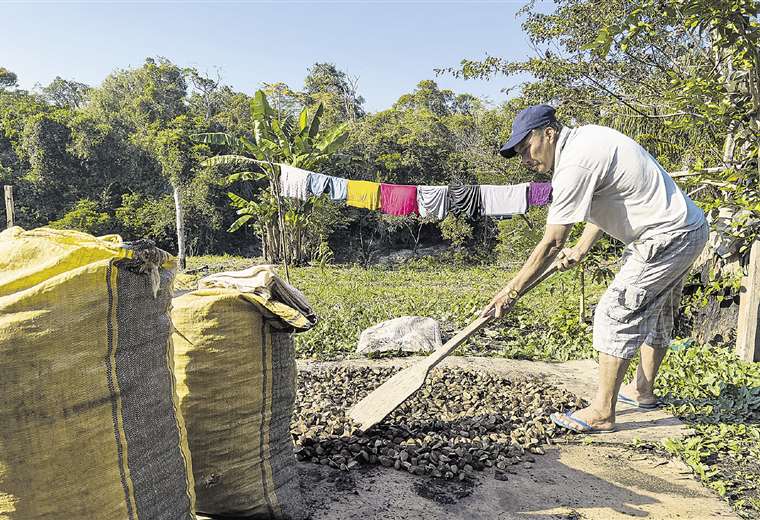 Brazil nut production is the livelihood of families, but they do not have many markets

The Araona nation has 95,000 hectares titled as indigenous territory and of that extension, 60% are used to produce chestnuts. In each year they have an average of 30,000 boxes of chestnuts of production.

“We are forgotten by the authorities. We need to build a health post and a new school, but they don’t do anything. Currently the mayors, governors who pass by do not know if the araonas exist. We are forgotten, abandoned and our rights as indigenous peoples are violated”, lamented Chanito Matawa, an Araona leader who is now a departmental assembly member of La Paz.

Matawa makes no secret of his sorrow over what happened recently. An old man -who in his culture are considered wise people of the third age- died because nothing could be done with his ancestral knowledge. It was urgent to take him to a health post, but the closest one is four days away by boat at this time. The same happens with children, women and all the inhabitants. They get sick and it only remains to pray that they get better.

“The brother has died due to carelessness, due to lack of food and nutrition. It has not been possible to give vitamins or food on time. We don’t have good food and the little they have given us in the municipality and the government is running out. We don’t have any health posts nearby, the only one we can travel to for four days is the one in Sena, where there is a health center,” explained Matawa.

For now, the Araona nation only has one means of communication with the outside of their village. They are HF radios that were installed a few years ago by non-governmental organizations and that serve so that the indigenous people can communicate with Riberalta. Matawa explained that on one occasion these teams helped an elderly person to be treated in time, since they issued a call for help through the HF radio system.

According to data from the 2012 Census, the Araona town has a population of 910 people. According to Matawa, there are now just over 70 families. The Araonas are one of the towns classified as highly vulnerable due to their population density and almost no access to basic services, such as health and education. Added to this is its geographical location between the Manupare and Manurimi rivers, which make it difficult to connect with populated centers. 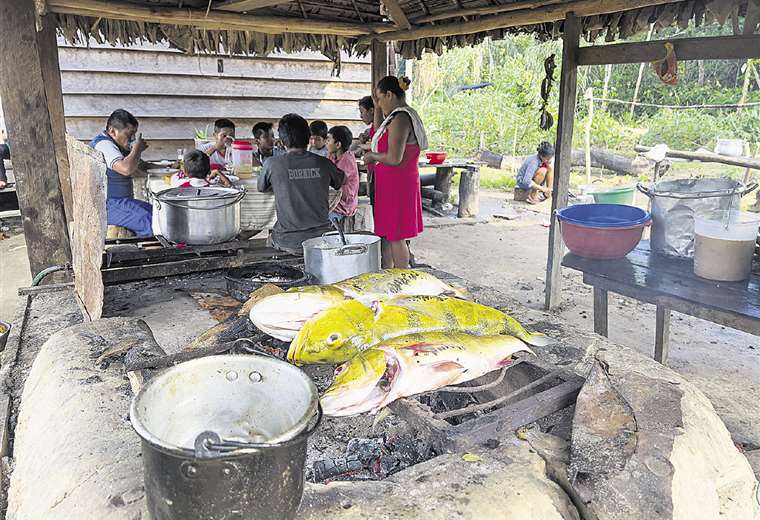 Fishing is a form of subsistence. There are varieties of fish in the Amazon rivers

In Bolivia, Law 450 was promulgated, whose fundamental objective is to establish the protection of indigenous peoples in danger of extinction. Eight years after its enactment, this norm has not been implemented and the physical and cultural existence of nations such as the Araona, Ese Ejja, Yaminawa, Machineri, Chacobo, Pacahuara, Ayoreo, Weenhayek, Tapiete and Uru are at risk. Aside of indigenous peoples in voluntary isolation, uncontacted or segments such as Toromona, Araona, Ese Ejja, Ayoreo, Yuqui, Pacahuara, among others.

The interim ombudsman, Nadia Cruz, explained that at the time of the pandemic, the different authorities were ordered to meet the requirements of the Araona nation, including the field of health. In addition, the official recalled that this indigenous people is highly vulnerable due to state neglect in terms of health, education, connection and identity.

Cruz clarified that these requests were made both in the efforts of Evo Morales, Jeanine Áñez and in the current one by Luis Arce.

In March, the Ministry of Health launched a health care plan in favor of indigenous peoples, especially those who are far from urban centers. It was reported that brigades made up of 1,274 professionals were formed, including 353 doctors. In addition, the Minister of Health, Jeyson Auza, explained that 20 state institutions are involved in this plan.

According to the Pometsekatapó of the Araona Nation, Palex Washima Jewapi, -who is the leader of this indigenous people that was previously called Captain Grande-, to date the plan announced by the Government has not reached the Araona communities. Moreover, the indigenous authority regretted that in other towns there are priorities to install health posts and not in the Araona nation.

“He who has health is saved. If there is an accident one cannot be saved. We feel abandoned. Easier for us is to say that they don’t remember us. It’s a shame. The ideal would be to build a health post and for there to be a doctor, that would be ideal,” said Washima.

In the Las Chacras community the landscape is unique. The green of the trees surrounds the few wooden houses that are in the place. The heat is infernal, but when it’s cold -according to community members- the temperature drops sharply. It is in the winter time when children suffer from respiratory diseases. They are cured with medicinal plants and their own treatments. Few in the Araona nation know about traditional medicines.

Washima wants a better future for his people. The same as Matawa and all the families that inhabit the Original Indigenous Territory of the Araona Nation (TIONA). They want to get out of abandonment and stop being forgotten. They seek to get their products to the markets, but they need a lot of help.

Rivers are the most used means of communication