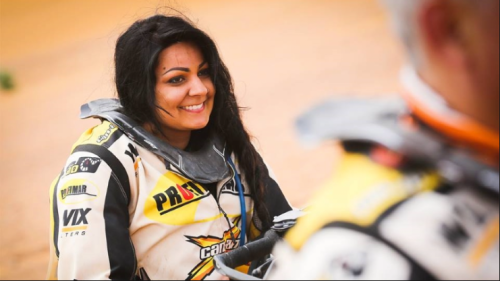 Asuncion (Paraguay), Jan 2 (IANS) Driver Suany Martinez will on Monday become the first Bolivian woman to compete in the Dakar race, thus fulfilling one of her “dreams” on board a Can-Am quad motorcycle.

“For now, I’m calm. But when the start approaches, I’m going to be really nervous,” the 25-year-old Martinez told Efe with a big smile.

The 2017 Dakar rally will kick off on Monday in Paraguay, traverse northern Argentina en route to La Paz, where there will be phases at 3,500 meters (11,500 feet) above sea level and a day’s rest on January 8 before returning to Argentina to finish up in Buenos Aires on January 14.

Martinez comes from a racing family. Her father, Leonardo, is participating in the same category in this year’s Dakar and already competed in the 2013 and 2016 races, when he withdrew in the third phase and then came in 12th, respectively.

In addition, her brother Diego raced in 2013 and this year will be her team chief.

“I’m going to take the first phase calmly. I raced in Paraguay last year and it’s a very nice place. This phase is more about speed, it’s going to be nice,” she said.

The first phase ends in the city of Resistencia, in northern Argentina’s Chaco province, after running 454 km.

In the fourth phase, the racers will return to Bolivia, specifically to Tupiza, in Potosi province.

“I don’t have any advantage, I’m going to suffer from the altitude just like everyone, but when you’re in your country you feel good, you feel different. The people there are very happy about the Dakar,” Martinez said.

“Here it’s the same. Here the warmth of the Paraguayan public is very lovely, just as I’m sure it’s going to be in Argentina,” she added.

Martinez came in 13th last year in the Dakar Series in Merzouga, Morocco.

“It’s one of my dreams to be in the Dakar,” she said. “After this, I want to keep competing in future years, each time looking to improve my placing.”

I’m glad and supportive of her, no doubt. However, as as responsible, conscious citizen, I have to say I do not accept the Bolivian government’s irresponsible payment to this race … just to improve the image of the coca grower’s caudillo, activities like this along with synthetic grass soccer fields, resume the “capacity” of his ruling ochlocracy.

Bolivia has lots to offer in tourism, no need to pay such huge amount with public funds. This is a private race, and as such should be funded.