Who won the gas war?

Humberto Vacaflor describes the aftermath of the so called “gas war” which, day by day, as we know more, demonstrates its violent motives which were no other to take over power, to throw a democratically elected government… and it only reflects why this and Venezuela governments fit under the ochlocracy category!

Who won the gas war?

Chile is now the main supplier of fuel to Bolivia as the figures of imported fuels in 2013 show, reflecting a strong change in diesel imports. For years, these imports were dominated by Venezuela but mismanagement of its economy has resulted in a decrease in their ability to export of petroleum-based fuels.

In 2013, Venezuela reduced its production capacity to such an extent that it came to import gasoline from the United States. The north country buys oil from Venezuela and transforms it into fuels that are then bought by Venezuela.

For Bolivia, this means a double punch: for the Bolivarian and anti-imperialist discourse promoted by Chavism and EMA, the mishandling of Venezuelan oil resources becomes the first embarrassment. The second is a blow to national pride in the fact that Bolivia depends now on Chile to maintain vehicular traffic in the country.

According to figures from INE, as of November 2013 Venezuela only managed to send diesel to Bolivia for three months, July, August, and November. Exports stopped even before the death of Chavez.

For years it was believed that the real winner of the war of the gas was Peru since the death of the export of Bolivian gas through Chile project strengthened the position of that country to sell gas from the Camisea in the form of LNG from. Peru came to acknowledging [decorating] its Ambassador to Bolivia during this period.

But the gas war also resulted in a profound change in the way in which the oil companies work in Bolivia. One of the results is that our oil production has been reduced by half since 2006. The direct beneficiary is now Chile. Bolivia now has an energy dependence of Chile, something which the heroes of the war of the gas would consider offensive. 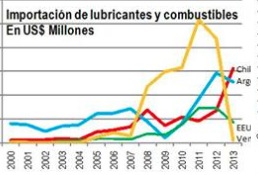