At last, some good news for the TIPNIS

#TIPNIS good news: Finally some light! They have admitted the popular demand. Read what was decided by the Constitutional Court.

1 Revoke the resolution 59/2012 dated October 8, as registered on “folios” fs. 54-55, pronounced by the Departmental Court, Second Criminal Chamber of the Justice of La Paz. (which reject the demand for popular action)

2 Provide that the departmental Court of Justice of La Paz. give the guarantees and support POPULAR action, and previous procedures of rigor in public hearing of consideration as determined, that applied in law is granting or denying custody.

They are good news brothers, admitted the POPULAR action, the audience is to be designated by the Court of Justice in La Paz, that TIPNIS are all of us, is our obligation to defend it!

Below, three “old” cartoons regarding the TIPNIS struggle: 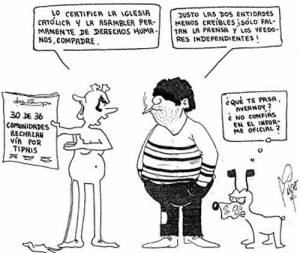 Newspaper: 30 of 36 communities reject the road through the TIPNIS.

Avernoy: “and is certified by the Catholic Church and the Human Rights Permanent Assembly, mate.”

Person: “just the two entities less credible; only missing the press and the independent observers!”

Dog: “what is wrong with you Avernoy? don’t you trust the official report?” 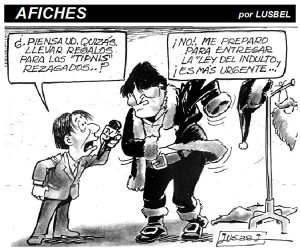 Reporter: “don’t you think, perhaps, to take gifts to the “TIPNIS” latecomers…?”

Current P: “No! I’m getting ready to deliver the “Pardon Law”. It is more urgent..!”

Here, current President, in a Santa Claus outfit, riding now a sleigh but a totora [plant that grows in Titicaca lake] made boat, running over Justice and the TIPNIS forest.

So, the TIPNIS saga continues…