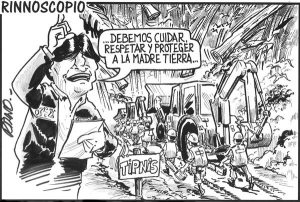 And a road construction crew and machinery entering the TIPNIS, destroying the forest… 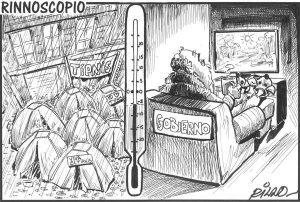 With very low temperatures in winter time La Paz city, the TIPNIS marchers camping out in the cold and rain… while the government sits enjoying all commodities our taxes pay for… 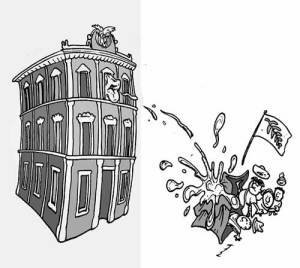 Cartoon reflects how TIPNIS people and the whole world viewed the “reception” current government, as portrayed from the presidential palace, gave to this brave marchers. 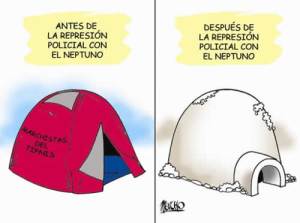 The camping site of the TIPNIS marchers, showing the before and after the police repression, using a water cannon (neptune). Well into winter time in the highlands of La Paz city…

The reaction of current government to TIPNIS claim for justice, note the coca leaves inside a bag with the colors of the indigenous flag…

Current rulers have forgotten they received crucial support from the lowlands indigenous groups for their electoral triumph.

Person: “Avernoy, it has started the campaign to nominate the ninth march for the TIPNIS to the 2012 Nobel Peace Prize”

Avernoy: “sharks, mate, can you imagine if this proposal us accepted and succeeds?”

Kid: “Nicola, what will happen?”

Nicola/dog: “That the Nobel Foundation will join the ranks of the imperialist agents and of the right coup-d-etat’s, kid!” 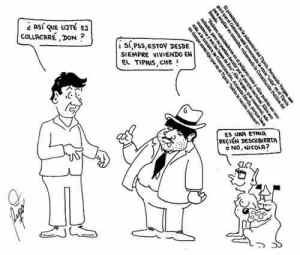 Part of a press article appears on the upper right corner, mentioning a declaration from Fernando Vargas, TIPNIS leader, regarding what he perceives a governmental maneuver: the ‘creation” of another indigenous group, with the intention to undermine the indigenous group cohesion.

Person in a lowlands Spanish accent: “so, mister, you are a collacare?”

Person in a highlands Spanish accent: “yup, I’ve been living in the TIPNIS forever!”

First person: “the good thing about the road is that we will be able to go anywhere!”

Second person: “the bad thing is that they could come from all over!”

Tomorrow, Sunday July 29, 2012, the government will launch its final offensive. Which is to cut in half the TIPNIS indigenous territory and OUR National Park. I just hope the indigenous people stand strong and do not lose their right over their own territory. It is unbelievable that our public officers can become so obtuse and egocentric. Current government has decided to go ahead with a road despite what the law says and the people of Bolivia. A sad reality, as a result of a majority vote and support to the leader of the coca growers of the Chapare…