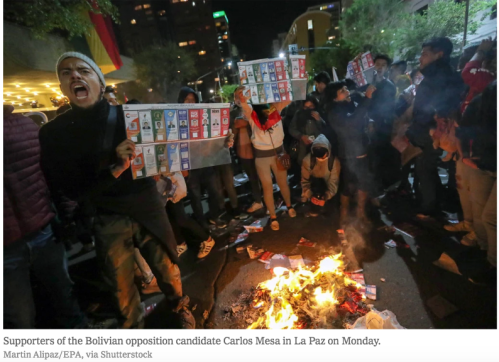 LA PAZ, Bolivia — President Evo Morales of Bolivia faced stinging accusations of election irregularities by international observers and violent protests in the streets on Monday as an updated tally of votes cast in the country’s presidential election appeared to give him a big enough lead to avoid a runoff.

Preliminary results released hours after polls closed on Sunday showed a far tighter margin between the two leading candidates, an outcome that appeared to make it certain they would face off in a runoff in December.

Manuel González, the head of the election observer mission dispatched by the Organization of American States to monitor Bolivia’s vote, said on Monday night that he was “profoundly concerned” by the “drastic” reversal in the vote results.

Mr. González, a former foreign minister from Costa Rica, said the vote trend data compiled by the mission’s observers suggested that the two candidates were apart by less than 10 percentage points. He called the tally released on Monday night by election officials “inexplicable” and said it eroded trust in the electoral system.

“It’s essential that the people’s will be fully respected,” Mr. González said.

He said that the O.A.S. intended to issue a comprehensive report on its findings in coming days and that the report would say a second round was warranted.

The damning assessment by the team of observers raised the prospect that a victory by Mr. Morales would be regarded by the international community as illegitimate.

While Mr. Morales’s consolidation of power, and his decision to do away with term limits, have raised alarm at home and abroad, the integrity of Bolivia’s election system has not been seriously called into question since he was first elected in 2005.

The uncertainty over the results opened a new front in the type of violent political unrest that has rocked the region over the past few weeks. Photos and videos of bloodied protesters were posted on social media on Monday night.

Mr. Mesa blamed Mr. Morales for the clashes and acts of vandalism that were spreading late Monday night. Among the most dramatic was a fire that engulfed an election tribunal building in the southern city of Sucre.

“The government, with its decision to again subvert the will of the people, is the only responsible party for the violence that threatens Bolivia,” he wrote in a statement on Twitter.

Many Bolivians were suspicious of the result because election officials halted the updating of vote results for nearly 24 hours. Across the country, people posted videos on social media of scenes that purported to show electoral irregularities, including stashes of ballots and other election materials found in residences and vehicles.

The accusations of fraud created a widespread sense that the president or his allies had worked behind the scenes to rig the vote.

Heavily armed police officers were deployed to the streets, where they clashed with demonstrators on Monday night, according to television news reports.

As acts of vandalism and protests spread across the country, some election teams participating in the vote count said they had suspended their work until order could be restored.

Waldo Albacarrín, a prominent human rights activist and university president, was among those wounded during protests on Monday. With blood streaming from his forehead after he was struck by a tear-gas canister, he said critics of Mr. Morales would remain undaunted.

“These people out here are not going to allow more abuses,” he said in a televised interview. 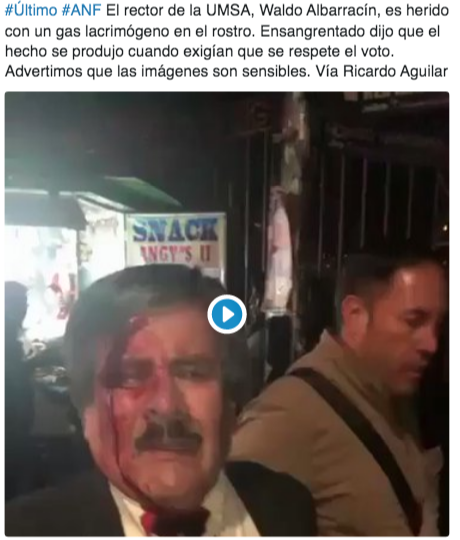 “This government is trying to block the path to a second round, which was clearly established yesterday,” Mr. Mesa told reporters.

If there is a runoff, Mr. Mesa would most likely get the backing of rival presidential candidates who participated in the election, so Mr. Morales would face a daunting fight.

Addressing supporters Sunday night, Mr. Morales characterized the result as a major victory and did not concede that there would be a second round.

“Nothing could be more false,” she said. She added that the governing party would “wait patiently” for official results. She blamed Mr. Mesa for stoking violence. 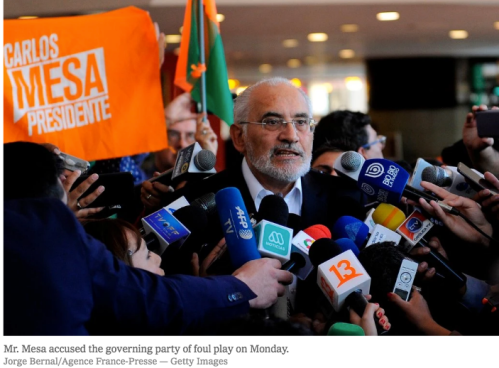 Election officials on Monday did not respond to questions about why the vote results had not been updated.

The Organization of American States, which deployed a large team of election observers on Sunday, expressed alarm and called on election officials to explain why they had stopped updating results. Several governments in the region also expressed concern.

In a statement on Twitter, he warned that the United States “will work with the international community to hold accountable anyone who undermines Bolivia’s democratic institutions.”

Brazil’s Foreign Ministry also expressed concern over what it called the “lack of response from election officials” about vote counting information.

Mr. Morales, 59, has been in office since 2006, making him the longest-serving head of state in Latin America. His bid for a fourth consecutive term has been criticized at home and abroad as a breach of Bolivia’s democratic rules.

Bolivia’s Constitution, which was passed during Mr. Morales’s first term, says presidents may serve no more than two consecutive terms.

In 2016, Mr. Morales put forward a referendum seeking to do away with that limit and lost by a narrow margin. The following year, however, Bolivia’s Constitutional Court gave Mr. Morales the green light to run again, issuing a contentious ruling that held that term limits infringe on basic human rights.

While Mr. Morales has been recognized for transformational policies that reduced inequality, empowered indigenous people and made Bolivia’s economy an exemplar in the region, many of his fellow citizens now want him gone.

Critics say he has become increasingly authoritarian, accusing him of abusing his influence over the judicial system to intimidate or sideline political rivals. They also contend that the government has wasted money on unnecessary projects, including a new 29-story presidential building, at a time when the economy is showing signs of strain.

Mr. Mesa had earlier noted that election officials had promised to release comprehensive preliminary results promptly after the polls closed.

“The longer it takes to learn the final results, the more chance there will be for manipulation,” he said.

Ernesto Londoño is the Brazil bureau chief, based in Rio de Janeiro. He was previously an editorial writer and, before joining The Times in 2014, reported for The Washington Post. @londonoe • Facebook

A version of this article appears in print on Oct. 22, 2019, Section A, Page 4 of the New York edition with the headline: Bolivia’s President Has Big Vote Lead as Monitors Express Doubts on Tally. Order Reprints | Today’s Paper | Subscribe