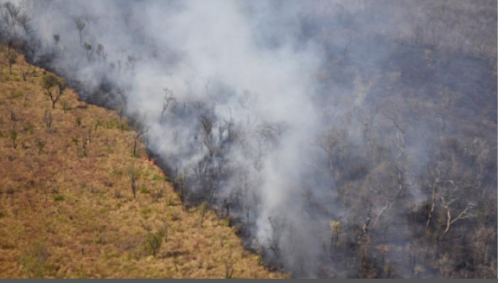 Aerial view of smoke coming out of a fire near Charagua in Bolivia, on the border with Paraguay, which was recorded in August. | File photo | AFP

The uncontrollable fires in Bolivia since August devastated 4.1 million hectares of forest and grassland, the private NGO Friends of Nature Foundation (FAN) reported today by presenting a report based on satellite images from NASA and the European agency ESA.

“The area burned in the department of Santa Cruz amounts to 3 million hectares and represents 74.5% of the total areas affected by fires nationwide (4.1 million ha.), According to the estimate made from satellite images of NASA and ESA, as of September 15, 2019,” said FAN in a statement.

A report from Tuesday of the Government of the department of Santa Cruz mentioned that in this region the flames swept with 2.7 million hectares. The central government has not released its report on the extent of burnt land.

The governor of La Paz, Felix Patzi, confirmed the fires in the north of his region, an Amazonian zone, and said that the government office of Civil Defense is being requested to support them.

Asked if the regional government could declare a departmental emergency, he replied that “it depends on the technical report and if it is uncontrollable, it must be declared immediately.”

Forest and grassland fires have not yet been controlled, while Bolivian state bodies fight for air and land to extinguish them.

Environmentalists blame the laws enacted under the Evo Morales government for encouraging the burning of forests and pastures to expand the agricultural frontier.

However, the ruling party attributed the phenomenon to dry weather, winds and deliberate burning of dismantling by locals.