LA PAZ (Reuters) – Bolivia’s top electoral court has threatened to sanction a local university for publishing what it deemed an “invalid” opinion poll that showed President Evo Morales much weaker than previously believed ahead of the Oct. 20 general election.

The survey, by the Higher University of San Andres (UMSA) and other top universities and civil society groups, indicated that 31.1% of voters planned to cast ballots for front-runner Morales, well below the 40% minimum he needs to win the election outright and avoid a December run-off.

It was the strongest sign yet that South America’s longest-serving leftist leader may be on shaky ground as he seeks another five-year term amid an economic slowdown, charges of authoritarianism and an outcry over raging forest fires.

The Supreme Electoral Tribunal (TSE), whose five members were appointed by the government and Congress, said the poll violated electoral laws regarding financing of polls and should be disregarded.

“The poll carried out by UMSA is invalid,” TSE spokeswoman Lucy Cruz told journalists on Wednesday after its publication.

Constitutional lawyer Ivan Lima told a local broadcaster ATB that the body was probably using a technicality that polls not be financed by public institutions or foreign organizations.

UMSA denied any laws had been broken.

Critics say Morales has taken a heavy-handed approach after more than 13 years in office. He is under fire for seeking a fourth term in defiance of constitutional term limits and a national referendum that voted against him being able to do so.

“If the government doesn’t like a poll, it orders the Supreme Electoral Tribunal to say it’s illegal,” said Mesa, who finished second in the survey with 24.9%. 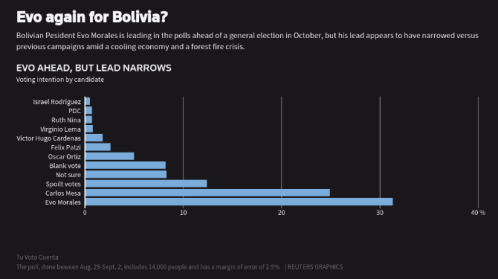 TSE denied its decision was politically motivated. The government denied any meddling.

Morales, Bolivia’s first indigenous president, has won all three terms in crowded first-round elections, with more than 60% in the two most recent votes during a period of rapid economic growth in the landlocked country.

While Morales is popular in rural areas neglected by previous governments, his support has slipped in cities where government abuse is a bigger concern.

If Morales does not win 40% of votes with a 10-point lead over the runner-up, likely Mesa, the two will face off in a second round head-to-head on Dec. 15.

Other recent polls have shown Morales headed to a second-round vote, though they have put him much closer to 40% than the UMSA-led poll. Some show him losing to Mesa in a hypothetical run-off.

UMSA touted the poll as one of the largest surveys on voter intent to date in the South American country of 11 million people. Some 14,000 voters were polled between Aug. 29 and Sept. 2. It said the poll had a 2.9% margin of error.

Vice President Alvaro Garcia told reporters the ruling party aimed to win enough votes in October to secure two-thirds of seats in Congress, a feat requiring 51% of votes for Morales.