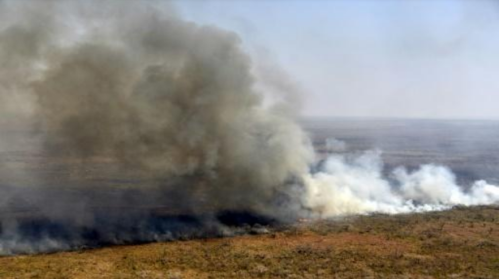 Wildfires that have raged across forests and grassland in eastern Bolivia for weeks have destroyed rare rock art sites, archeologists announced Tuesday.

“We believe that the damage is big and wide in terms of our heritage of rock art,” said Danilo Drakic, chief archeologist in the eastern Santa Cruz department.

Drakic said fires that have raged since May had caused significant damage to rock art sites near the eastern town of Robore. The sites contain engravings dating from 1,500 BC.

“A dark layer of soot has covered all the paintings,” said Drakic, citing an initial appraisal of the damage. Heat from the fires “has caused stones to break, even to collapse.”

He said a full assessment of the damage could only be made once the fires had been quenched.

Authorities declared the town, some 1,300 kilometers (800 miles) east of the capital La Paz, a “departmental capital of rock art” in May 2017.

Bolivia’s culture ministry said the fires were endangering the Jesuit Missions of the Chiquitos, six settlements built by the Catholic religious order in the 17th and 18th centuries that were declared World Heritage Sites by UNESCO.

Culture and Tourism Minister Wilma Alanoca said the Jesuit sites closest to the fires “have not yet been affected” but are in danger.

“There is no doubt that there is an impact on the intangible heritage of the area, which will have to be evaluated once all heat sources are eradicated, which is a priority for the central government,” state media quoted Alanoca as saying.

Fires have so far destroyed 1.2 million hectares (3.2 million acres) of forest and grasslands in Bolivia this year, the government said last week, though environmentalists claim the true figure is much greater.

Bolivian Thoughts opinion: While this nightmare sprouts beyond control, current government’s main concern remains to be illegally re-elected, despite the Referendum that said NO more with the stolid-ochlocrat evo!

He neglects to call for a National Disaster, so foreign aid can come, even after weeks of requesting so vehemently by most of Bolivian society,

The following videos also show how we protest overseas …

Stubborn as he is, egocentric as he became over the last 14 years of absolute control of ALL State powers, evo clearly wants to go through history as the worst president ever!