Posted on September 2, 2018 | Leave a comment
By LAURENCE BUTET-ROCH, Photographs by LUISA DÖRR for National Geographic;

Noelia, a 19-year-old wrestler, poses for a photograph in her traditional cholita garb.

“People need heroes, wrestlers, champions of their own who can be admired,” reflects Brazilian photographer Luisa Dörr, who spent ten days in El Alto, Bolivia, with a unique group of female wrestlers known as the Flying Cholitas. Recognizable by their colorful and elegant attire of multilayered skirts, embroidered shawls, and precarious bowler hats, cholitas emerged at the turn of the millennium—an expression of the indigenous renaissance taking hold in the Americas.

Angela, a single mother who uses her wrestling money to pay for her son’s education, says, “People need some reason to fight, and mine is my son.” Her 12-year-old son comes to watch all of her matches. 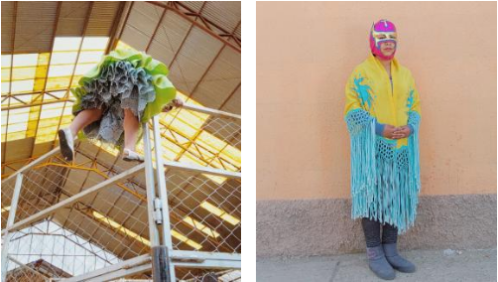 Left: Once a year in El Alto, Bolivia, wrestlers take part in a large-scale mixed-gender fight. Anyone wishing to escape the fight must jump the fence around the ring, and the last person inside is the winner.

Right: Wara, a 19-year-old wrestler, says, “Thanks to wrestling, I have traveled to many places in Bolivia. For us, this is our profession.”

Dörr, who likens them to Hollywood superheroes capable of flying, first encountered the wrestlers while her husband was working with local architect Freddy Mamani. She recalls attending Sunday matches at the community’s multifunctional center: “It’s been a long time since I stopped liking the men’s fights. They’re the same as ever, but the Cholitas are the ones that save the show. The younger audience members identify with the good heroines, while the older ones prefer the rougher ones,” she says.

The Cholitas train twice a week and watch YouTube videos of Lucha Mexicana to improve their techniques and tricks. “The fight, more than anything, is a constant update of maneuvers. It’s like riding a bicycle; if you learn to walk, you never forget. But if you want do tricks, you need to practice. The fight is the same. An eternal learning,” explains Claudina, whose father, brother, and sister also wrestle.

Left: Wara, 19, raises her hands in the air as her portrait is taken.

Right: The ring at the Dolores de El Alto Sports Center is surrounded by a fence—and, during matches, by cheering, shouting, and jeering fans.

And the better they get, the more they can assert their presence in a field dominated by men. At times, both genders are even pinned against one another. “When a woman fights 100 percent, men want to fight 1,000 percent. They do not accept that they are overcome. In our companions, there are also some anti-Cholas,” says Mary Llanos Saenz, known as Juanita La Cariñosa in the ring, who’s been fighting for almost 20 years. “In the beginning, we were not allowed to enter the men’s room. We used to change in the stands and wait outside. That’s why we created the Association of Fighting Cholitas. There, men do not get involved.”

Monica, a friend and social worker in the community, was Dörr’s way in. “[The Cholitas] don’t really care about journalists and fancy magazines,” Dörr remarks. “Many of them were not interested with wasting time with a photographer on a story they will not ever read.” Their attitude toward media is at least partly fueled by the fact that the cholitas have much more urgent concerns than becoming famous. For centuries, they’ve also been fighting outside the ring to protect the well-being of their community.

Angela, like many Flying Cholitas, is a single mother. Others have partners who are also wrestlers. 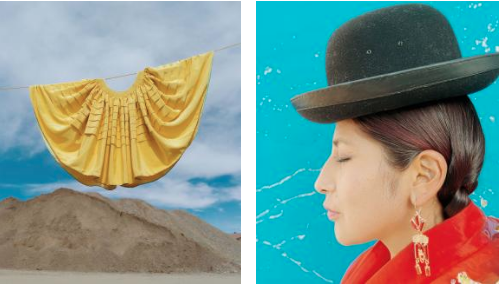 Left: The voluminous skirts women in Bolivia were forced to wear by Spanish settlers for centuries are now symbols of identity and pride.

Right: Sonia, who owns a beauty salon, says, “Sometimes we get hurt and we have to stop [fighting] for a few months. I already broke my wrist, but I never had any injuries that would impede me [from fighting or working] again.”

Most cholita wrestlers are Aymara, an indigenous nation residing in the high plains of South America. The group has faced ethnic oppression and exploitation since the Spanish colonization of the region. Referred to pejoratively as “cholo” or “chola” at the time, they were forced to perform menial tasks for aristocrats; required to adopt European customs; refused entry to restaurants, public transportation, and certain wealthy neighborhoods; and denied the opportunity to vote, own land, and learn to read. [Bolivian Thoughts opinion: Regarding the left caption of the photo above, I beg to differ. Indigenous women and later on mestizo women were not forced to wear that attire. Rather, they embraced the way the Spanish women used to wear at a time. Women used to wear the shawl and the pollera (skirt) with boots, which nowadays you can see them only at typical dance festivals. The skirt and shawl came from Spain, the shawl is originally from China. The bowler hat was marketed for mestizo women, from a lower social class, who did not have the money nor the status to wear western clothing; this bowler hat was imported in large quantities and could not be sold to the men population, thus ended in the women’s segment. Indigenous women had a different set of clothes, like men, however as they moved from the rural to urban settings, they also grabbed the clothing of the mestizo of lower urban class population.]

Resilient, the community organized, leading several successful movements over many decades, the latest of which was the ousting of President Gonzalo Sanchez de Lozada—currently facing charges for extrajudicial killings—and the election of an Aymara politician, Evo Morales, to the country’s highest office. In the process, they’ve reclaimed the once-pejorative name and style of dress, turning both into symbols of pride. [Bolivian Thoughts opinion: Said ousting was more of a de-facto coup d’etat which later on ended the government in evo’s hands. The latter was self-labelled as indigenous but does not speak Aymara and uses only demagogue to reach indigenous voters. Bolivia’s turmoil is filled with casualties from lower-income classes, this segment of the population has been used by left and right politicians as they are easily manipulated, El Alto population mainly lives around the informal economy. There are extremely rich Aymara people who show off their wealth in their cholets, expensive luxurious buildings as there are also extremely poor households. The Aymara population are regarded as the Phoenicians of the high lands. You can see them capturing the large vegetable market in Buenos Aires, or trading nationwide. People very proud of their culture, they carry their customs anywhere they live. You can see a cholita with those heavy, warm skirt in the hot, humid tropical towns of Bolivia, no complaints about the weather, it is just who they are. In the past, to climb the social structure, women chose to abandon their typical skirt (pollera) and used western clothing, nowadays it is up to the individual’s choice. However, under evo’s demagogue populist government, we can see cholitas working inside a public office, and when they go home, change to their western clothes. Men in politics also choose to wear ponchos or hats during their “political work.” These people choose to wear traditional clothing as it serves their political purpose. At social, family events they go back to modern type clothing. Finally, it is worth mentioning that a full cholita attire is far more expensive than wearing western clothing. And people who are supposedly “poor” choose to spend more on this traditional clothing. They also like to offer expensive long-week parties to a large crowd every once a year, while the rest they have to save money for that boondoggle. It is simply how they are, nothing wrong about that, it is their choosing.]

“When El Alto gets angry with the state, because they have neglected their schools, their health centers, or their markets, or because of the absence of security in the neighborhoods, it is the women who go out and demonstrate,” explains Dörr. “And therein lies the essence, the reason why people enjoy watching and admiring the Cholitas fight, because it is the dramatization of the Chola Aymara woman from El Alto.”

When many members of Bolivia’s indigenous community were forced to work as servants for Spanish occupiers, they were made to wear a particular set of garments. Some of these items, including voluminous skirts and bowler hats, are now symbols of pride for cholitas.